Home > Products > At the Point

At the Point was one of the first crop of ASL newsletters that began to appear in the early 1990s (the second crop, beginning in the late 1990s, tended to be published by ASL groups or clubs or for a particular region rather than for the general ASL audience).

At the Point featured heavy duty ASL content, including Scenario Replays, scenario “crossfires” (established here by Mark Nixon and Robert Banozic, who then–especially Banozic–took this show on the road in all sorts of other ASL publications), tactics articles (such as “Panzer Gegen Panzer” by Bruce Bakken), rules articles, and more.  Hanna was able to attract some of the best ASL writers at the time.

In 2011, Marc Hanna kindly allowed an ASL newsletter of the second generation, View from the Trenches, to make the content and scenarios of At the Point available for download on its website.  This ZIP file is available here:  http://www.vftt.co.uk/files.asp. 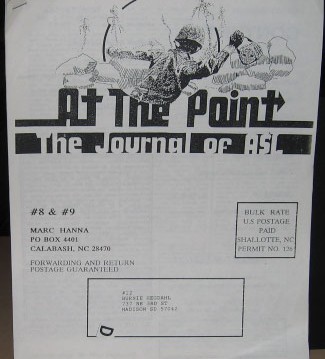