Home > Products > Audace: The Great War: The French Army in World War I

The latest in an endless series of crappy ASL “products” produced by Bill Wilder.  This is the fifth of a five part series of “products” that ostensibly take ASL to World War I.  This is a bad idea even for a legitimate ASL designer, as for most of the war for most armies the squad was not even a maneuver unit in World War I and the system is not able to model First World War fighting well.  In the hands of someone who just slaps things together without playtesting or development, well, it is not going to get out of the starting gate.

This “product” requires the “product” Landships and Tommies to play.  It contains French, British, and German counters.  Unlike some earlier First to Fight “products,” in this one the counters are not even cut.  No mini-maps or overlays were announced for the “product.” 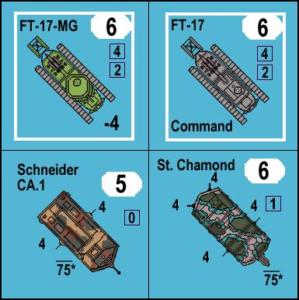