2nd Edition:  9 scenarios (this edition omitted the overlay but provided a link where it could be downloaded--that link no longer works).  This edition was for some reason also missing a scenario.

The third of the Paddington Bears “trilogy” of scenario packs, this one may be the best of the three (which is saying something).

A 2nd Edition of this product somehow omitted one of the original scenarios, PBP23 (Panzerkeil)–either altogether or, by error, in many copies of the product.

Two scenarios, PBP30 (All Aboard!) and PBP29 (Block at Anui) are set during the Korean War.  PBP21 (Raiders of the Chaco) is set in the Chaco War.

Scenario PBP#24 (Gurkhas and Grants) uses the Stoumont map from Kampfgruppe Peiper to portray one of the Imphal campaign battlefields.

Its 10 scenarios include three classics:  PBP22 (Morire in Belleza, featuring Italians and Yugoslavs), PBP25 (First and Inches), and PBP26 (Steamrollers).   Also good are PBP24 (Gurkhas and Grants) and PBP21 (The Raiders of the Chaco).  This is a scenario pack that should belong in every ASLer’s collection. 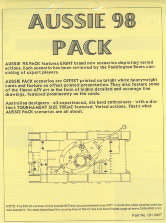