The second of three scenario packs featuring the efforts of the Sydney, Australia, based Paddington Bears ASL Club, the ’97 Pack offers eight more scenarios (though nothing else).

Some very tasty scenario offerings are served up here, including the finely honed PBP13 (Marked for Death). Other scenarios well worth trying include PBP14 (Under Siege) and PBP15 (The Road to Mandalay). There’s no reason not to acquire this scenario pack. 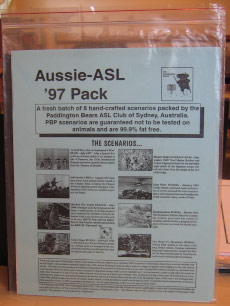