The Axes to Grind Pack continues Battleschool’s extended “Nationals” line of nationality-based 1/2″ custom precision dice.  It adds five new (Balkan) combatants to the mix, all either Axis minor allies or puppet states:  Croatia, Bulgaria, Romania, Hungary, and Slovakia. The name is apparently a pun based on the plural of the word “axis.”

The Croat and Slovak dice will see little use, as relatively few scenarios exist depicting these small puppet powers.  The same is true for Bulgaria, which did a lot of fighting but spent most of the war combating partisans in Yugoslavia and Greece, until it changed sides and began fighting against the Germans in Yugoslavia.

This means that the main use people will get out of these dice will be with the Hungarian and Romanian dice, as quite a few scenarios exist for these nationalities.

Each die is a white die with a symbol/emblem where the 1-pip would normally be.  No color die accompanies them.  They are attractive. 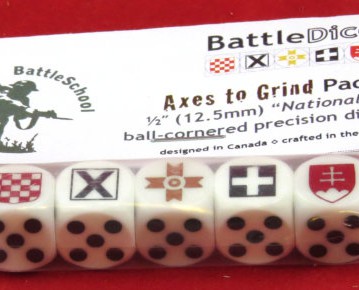