Battleschool’s follow-up to its East Meets West pack of nationality-themed dice is the Axis and Allies Pack (AAP).  Like its predecessor, AAP contains 5 1/2″ (12.5mm) white custom dice, with a nationality-themed emblem where the 1-pip traditionally is.  Unlike the first dice pack, AAP does not include 5 generic colored dice along with the customized one.

The first pack contained dice designed for the Soviets, Germans, Americans, Japanese, and Chinese.  Though one might wonder why the British did not appear rather than the Chinese, all five of these nationalities were major combatants in World War II and appear regularly in ASL scenarios.  With AAP, however, things start getting a little flaky.  Here are the five combatants represented in AAP:

Really, the Free French and especially the Swedish Volunteers dice clearly only exist for one purpose:  to create as many nationality dice as possible so that completist ASL players will feel a compulsion to purchase all of them.   That this is true is confirmed by the announcement of some of the upcoming nationality dice, which will include, of all things, a Danish die.  Now ponder that for just a moment.  The Danes surrendered their country within hours of the German invasion, without putting up a fight, and moreover never developed a partisan movement that engaged in any combat.  And yet Battleschool is coming out with an ASL die for the Danes?   There are a total of three published scenarios, official or third party, that have Danes, out of the thousands of scenarios.  These dice are not cheap.  Asking people to buy useless dice in order to have a complete set seems somewhat  mercenary. 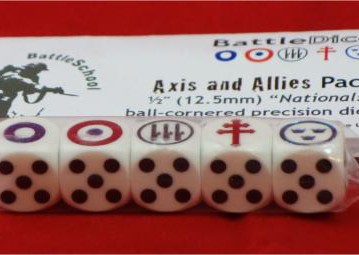