The Baby Tears  are more or less a smaller (1/2″/12.5mm) version of the 9/16″ rate of fire dice previously released by Battleschool.  Their name is a pun that contrasts the tears of a baby with a “baby” (as in small) die for rate of fire “tears” (as in “going on a tear”).

Rather than the weapons images that appeared on the older ROF die, the Baby Tears dice have normal pips, but also include a small foil diamond (one black die with red foil, one black die with gold foil, with the former being a bit harder to read).  Essentially, the dice just make it a bit easier to note when one has kept rate of fire.    The Baby Tears are better than the original version, which was just not very practical, but perhaps would have been better still if large ROF images had simply replaced the pips on those faces.

It should be noted that, as of this writing, these are also the only 1/2″/12mm custom colored Battleschool dice released so far, and thus also serviceable as the colored die to accompany one of the various nationality dice.

2015 Notes: In 2015, Battleschool released a cosmetically different set of the Baby Tears dice.  The dice are still black, but now they have gold and green foil rather than gold and red foil. The green foil doesn’t always show up that well against the black background. They probably still need to be larger and more visible (or have the pips replaced entirely by a very large ROF square and number). 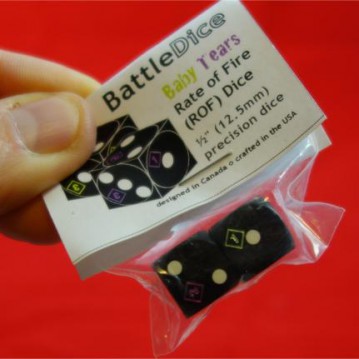