Contents:
42-page magazine, with 8 scenarios as pages of the magazine

Before MMP began creating and developing “official” ASL material (under arrangement with and on behalf of Avalon Hill), its one and only claim to publishing fame was an ASL magazine, Backblast, which lasted for just two short issues in 1994-1995.

Those dates are significant because 1994 was a year deep in the “Dark Ages” of ASL.  The ASL Dark Ages were a period from roughly late 1993 to early 1996 when the future of ASL seemed very much in doubt.  Much of this uncertainty was due to the incompetence of the Avalon Hill Game Company, a company that was always able, whenever one thought it had reached the limits of its incompetence, to reach deep into itself and find some more incompetence in some dark recess.

Squad Leader had been one of the company’s most successful games ever and Advanced Squad Leader had become a very successful game series on its own–so successful, in fact, that the only regular gaming publication published by Avalon Hill other than its house magazine, The General, was the ASL Annual.  In 1993, the ASL Annual even went to a twice-yearly schedule.  Abruptly, however, the Annual disappeared, with Avalon Hill announcing that its ASL content would be folded back into The General.  Exactly what ASL content there would be, however, was an open question, because many of Avalon Hill’s employees left the company during this time period, including several who had been key to ASL, such as Robert McNamara and Charlie Kibler (who both went to computer game company TalonSoft) and Rex Martin.  Planned ASL projects such as Kampfgruppe Peiper, the “Third Bridge” Arnhem module and Solitaire ASL were put on hold.

It was during these dark days that many ASLers came to the rather logical conclusion that ASL would likely only survive if the players themselves kept it alive.  From the ranks of the ASL players rose new third party publishers, people willing to go beyond mere xeroxed newsletters to produce magazines, scenario packs, and even modules.  Magazines like Time on Target and Critical Hit Magazine appeared at this time.  And so too did a magazine called Backblast, published by a new entity, Multi-Man Publishing.

Multi-Man Publishing was formed by five East Coast ASLers:  Brian Youse, Perry Cocke, Chuck Goetz, J.D. Frazer and Steve Peterson (its principals evolved over time, with some, such as Chuck Goetz, leaving, and others, such as Russ Bunten and Curt Schilling joining, but the two key figures have always been Brian Youse and Perry Cocke).  The people who formed MMP knew that ASL had hit some hard times.  “Obviously, though,” Backblast stated in its first issue, “[Avalon Hill] is not all that interested in ASL.”  MMP concluded, though, that “ASL will survive, despite being deemphasized by [Avalon Hill], due to the dedication of the ASL community.”  Backblast, its publication, was designed to support ASL in just such a way, with the mission of promoting ASL “through the publication of quality articles and scenarios.”

In format, Backblast basically emulated the ASL Annual.  It had similar types of articles (often written by the same people who had written ASL articles for Avalon Hill) and featured a number of scenarios, as did each issue of the ASL Annual.  In physical quality, of course, it couldn’t match the Annual (it was just a black and white publication, for example), but the quality of its writing was high for a third party publication.  It was not, though, just an Annual clone, but had its own personality (it concentrated on gameplay articles rather than historical articles, for example, and never saw a rules article it didn’t like).

Eventually, Avalon Hill did make an effort to keep ASL alive by bringing Texas ASL Gary Fortenberry, editor of the ASL newsletter ASLUG, into the fold to handle their ASL line.  However, Fortenberry did not stay with Avalon Hill long.  With his departure, Avalon Hill looked around and noticed nearby MMP, who had also been playtesters for Avalon Hill.

Here were “local” ASLers, and more than one of them, who had on their own published a high-quality publication very similar in nature to the ASL Annual.  In a rare moment of clarity, Avalon Hill reached out to MMP to produce ASL content for it.  As a result, MMP stopped publishing Backblast after only two issues and began publishing the revived ASL Journal (which, surprise surprise, took on a very Backblasty feel).  This put MMP in place, a couple of years down the road, to make a pitch (no Curt Schilling reference intended) to Hasbro for ASL when Avalon Hill kicked the bucket.

Backblast did live on, in one sense.  Over the years, MMP assiduously dusted off as many of its dried bones as they could find, reprinting scenarios and articles with abandon.  Thus BB3 (Point of the Sword), BB4 (A Desperate Affair), BB5 (Going to Church),  and BB11 (Kangaroo Hop) appeared in For King and Country; BB6 (Shattering the Line) and BB10 (Surrender or Die) appeared in Out of the Attic, as did several Backblast articles; BB7 (The Pinnacle) appeared in the ASL Journal; and BB16 (Ambitious Plans) appeared in Operation Watchtower.

The first issue of Backblast was quite professional in both appearance and content.  Content included a focus on the Night rules in ASL, with two articles (“Bring on the Night:  Taming the ASL Night Rules,” by J.R. VanMechelen, and “Who Rules the Night?  Strategy and Tactics for Night Fighting,” by Chuck Goetz, both of which were later reprinted in Out of the Attic) and a Scenario Replay of a night scenario (Sicilian Midnight).  Also appearing were articles on anti-cave tactics, a scenario crossfire by Rob Banozic and Mark Nixon, and articles on ASL and the Internet (in those days when not everybody even knew what the Internet referred to).

The eight scenarios included several that were good, such as BB4 (A Desperate Affair) and BB6 (Shattering the Line), as well as two genuine classics:  BB3 (Point of the Sword) and BB5 (Going to Church).  All of these were later reprinted:  BB3, BB4 and BB5 in For King and Country; and BB6 in Out of the Attic.  The other four scenarios have not been much played, no doubt because they are all either cave or night scenarios.  Ironically, the scenarios in this and the next issue of Backblast both used copyrighted “official” ASL artwork, something about which MMP, as an “official” producer of ASL products, would later give other third party publishers much grief.

The scenario actions include:

BB4 (A Desperate Affair) is an airdrop scenario. 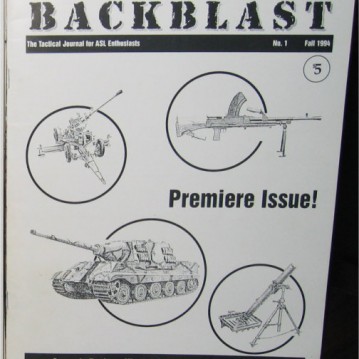