Contents:
42-page magazine, including 8 scenarios as pages of the magazine

The second (and final) issue of Backblast came out in the spring of 1995 and looked much like hte first.

Article content in the sophomore issue of Backblast includes an article on HEAT LATW, another scenario crossfire by Robert Banozic and Mark Nixon, tournament reports, an article on wire/panjis/A-P mines, a scenario analysis, an article on vehicle overruns, designers notes, and a good article on armor tactics by Rodney Kinney.

The eight scenarios include actions from Norway to the Pacific, some of which have been quite well received by ASLers, such as BB10 (Surrender or Die), BB12 (The Awakening of Spring) and the virtually unpronounceable BB13 (Triumph atop Taraldsvikfjell).  BB10 is also of some historical interest because it may be the only Evan Sherry scenario that did not appear in his own magazine, Schwerpunkt. 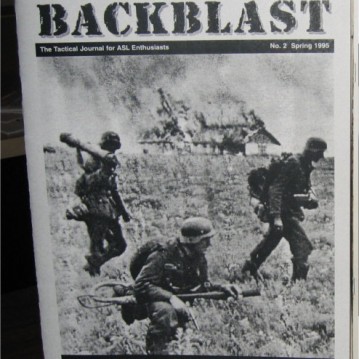