The Balkan Blues Pack is a set of two 1/2″ (12.5mm) custom nationality-based precision dice, part of Battleschool’s “Nationals” series.  All the early sets in this series came in packs of five, but the last three releases came in packs of 2, 2, and 1 (which adds up to five, leading to an obvious question).

This pack provides dice for Yugoslavia and Greece.  The former will virtually never get used, as the Yugoslav Army only fought desultorily for a couple of days before surrendering and there are hardly any scenarios that feature it.

The Greek die could get used more often, both for the fighting in 1940-41, conceivably for the partisan warfare in Greece, and presumably the three Greek brigades organized by the British that fought a little bit in North Africa and Italy when they weren’t mutinying.

The dice are attractive but essentially for completists only. 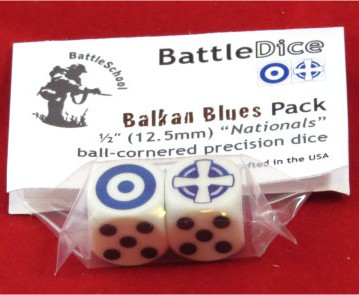