The unstoppable scenario designer Paul Kenny released Balkan Warfare as his third scenario pack for 2006 (something that on its own ought to raise an alarm bell).  Eight of its 10 scenarios take place in Yugoslavia, a ninth occurs in Romania, while the last scenario oddly enough is set in Italy.

Unlike Fanatic Enterprises’ previous release, which featured color scenario cards and counter art, this release has neither, reverting to the older style of earlier releases.

One scenario is small; the remainder are all medium or large in size.  A number of them are exotic in terms of their situation, which provides considerable novelty value for ASLers tired of playing their umpty-umpth Arnhem or Kursk scenario.  FE50 (Hungarian Ghoulash) pits Hungarian paratroopers against the Yugoslav Army in 1941 (the paratroopers enter by paradrop, although it seems really hard to justify it based on the historical description).  Other scenarios pit Yugoslav partisans vs. Italians, Bulgarians vs. Albanian puppet troops, Yugoslav partisans vs. Croatian puppet troops, Romanians vs. Germans,  Yugoslav partisans vs. Germans, and British vs. Germans.  The range of nationalities and situations is quite nice.

The historical accuracy of some of the scenarios is a little questionable.  In all of the scenarios featuring Yugoslav partisans, for example, the partisans are armed with Soviet support weapons, when in fact none of the partisans had any Soviet support weapons at all until late 1944.  This can be significant when one thinks, for instance, of how cumbersome a Soviet MMG is, vs. an Italian or German MMG, or how powerful a Soviet 45L AT gun is (which the partisans have in one scenario).  FE51 (Wolf Pack in the Hills) claims that the Yugoslav forces are the 1st Proletariat [sic] Brigade of the 1st Proletariat [sic] Division.  However, the 1st Proletarian Brigade actually did not form until several days after the action depicted in the scenario, while the first partisan divisions were not formed until considerably later.  As are all of Paul Kenny’s packs, Balkan Warfare is indifferently proofread (thus one unit is identified as “Slavonian” rather than “Slovenian”).

One of the scenarios, FE55 (Friends No More), requires geoboard FE1, which at that time was available only in electronic form as a VASL file, but which later saw print the following year with the Budapest pack.  Another scenario, FE56 (Covering the Retreat), uses ASLSK geoboard w.

The main concern that anyone might have regarding this pack is the quality and depth of playtesting and development, given the frequency with which Fanatic Enterprises–essentially a one person operation–issues new releases.  Paul Kenny clearly has considerable skill as a scenario designer, but there are many who might wish that Fanatic Enterprises would release one pack a year filled with excruciatingly well playtested scenarios rather than three or four packs a year with less playtesting.

In the (as of this writing) eight years since its release, the scenarios of Balkan Warfare have received almost no playings on ROAR. 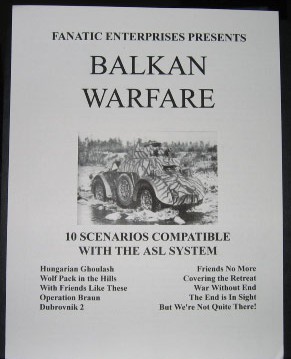