Alternative Titles/Edition History:
1st Edition (Bandenkrieg, 2012; may have had a reprint in 2014)

Bandenkrieg (BK) is a historical module depicting combat that occurred during an anti-partisan operation, Operation Lenz Nord, near Borisov in Byelorussia in April 1943.   Details of this operation are sparse in the historical literature, so one must assume that there is a fair amount of hole-covering in the module, but this would be true for many attempts to depict partisan-related combat (except for a few famous incidents, such as the 1944 Warsaw Uprising, or Vercors, etc., which have been well-documented).

The main partisan unit represented, the “Partisan Regiment Bolschevik,” was probably actually the unit known as Partisan Brigade Bolshevik.  This unit appears in the scenarios organized into “rifle companies” and “heavy weapon companies,” which it might not actually have had in a formal sense (Soviet partisan brigades consisted of a varying number of “otryadi,” or detachments).

There are only a few pages of rules–much of the 8-page rulebook is taken up by designer’s notes and a book review purloined from Amazon.com, apparently without its author’s permission (the rulebook says that it “was taken from a public source,” as if a review posted to Amazon.com was not still copyrighted).  Some of the rules simply explain terrain conditions (bridges are wooden, etc.) or general module provisions (H-t-H CC is allowed, etc.).  There’s a short rule for hidden “cleared fire zones” (a good concept appearing more often in ASL products), some rules for livestock (with counters), provisions for gleaning support weapons from the battlefield, and so forth.  There are a few rules for the partisans (nothing unusual), and more rules to represent the notorious Dirlewanger Brigade, Ordnungspolizei, and Schutzmannschaft.  None of these rules are complex and, unlike some other HASLs, players can almost immediately be up and running with a scenario.

BK comes with a countersheet.  Unlike the countersheets that have appeared with so many other recent Critical Hit products, the BK countersheet actually provides useful counters.  It includes a few markers (livestock, cleared fire zones, gleaning markers, and ammo counters), but mostly has units.  The Soviet partisan units include some extra 3-3-7 squads, some 5-2-7 partisan squads, various SW (including TNT, though no scenarios actually use this counter), and a few vehicles and guns.  The Axis units include 5-4-8 and 4-4-8 squads for the Dirlewanger Brigade, 4-3-7 squads for the Ordnungspolizei, and 3-4-7 and 3-3-6 squads for the Schutzmannschaft units.  All SS units are unfortunately black (there are no normal colored SS counters), and the other units are two-toned, with a black outline around a green or blue interior.

A couple of the scenarios seem a little sloppy.  For example, BK1 (Death Before Breakfast), has an SSR that allows the German player to secretly choose one of two OBs to use for the scenario.  However, the German player sets up first and the two possible OBs are very different in nature, so the Soviet player will immediately be able to tell which one was chosen.  So why is the OB chosen “secretly?”

A majority of the scenarios allow at least one player to make choices with his OB, which is always nice.  Several scenarios feature reinforcements that enter depending on a die roll.  One scenario, BK8 (The Key to Korkeyka), gives the partisan player a chance to have a couple of AFVs.  Some references to the fighting suggest the partisans had some armor, though this seems strange for 1943 (it did happen sometimes earlier in the war), and the nature of the armor was not specified.  The big scenario in the product, which uses the entire map, is BK9 (Chaos in Haste), which is not set during Nord Lenz but rather the following year, during Operation Bagration in 1944.  This scenario features a German attempt to break out from encirclement by regular Soviet Army forces and local partisans.    The Germans have 33 squads, 2 guns, and 6 AFVs (plus some halftracks and trucks).  The Soviets have 20 partisan squads, 9 Soviet squads, and 15 AFVs.

There is no campaign game provided.

Overall, Bandenkrieg seems like a decent product.  The main “drawback” is that it features partisans, which some ASLers do not care for.  However, that is often because they are so generic in ASL, but Bandenkrieg attempts to give them a little more color.  The other “drawback” is that the Axis units featured are often low-quality units, and some ASLers only seem to want to play with elite forces.  However, for those many ASLers who are actually interested in gaming all facets of the war, it is exactly the presence of unusual units like the Schutsmannschaft which gives Bandenkrieg some extra appeal.  In other words, neither “drawback” is actually a true drawback.   Bandenkrieg is probably most appealing to those ASLers who like a touch of the exotic.

In this instance, Desperation Morale acquired only one of the multiple versions of this product released in 2018-19:  Cruel Hunters 1.

It is well known that Critical Hit has a very bad practice of renaming its products (and often the scenarios therein) and rereleasing them as if they were new products, seemingly in the hopes that retailers and consumers may unknowingly purchase them. Every few years this can be expected to happen to many, if not most, Critical Hit products.  However, in 2018 and 2019 Critical Hit seems to have broken new ground in this area, releasing 4 products within a year or so with different names that are all basically new versions of Bandenkrieg.

The first of these is Operation Lens Nord (this is a Critical Hit typo in the title; it is supposed to be Lenz Nord), released in 2018, which Critical Hit explains as “updating the map and situations from the former Bandenkrieg.”  Critical Hit also says that this module “covers actions from parts of Bandenkrieg, plus new ones,” and that the OBs are different from previous OBs.  This module contains no counters but does contain a reworked version of the Bandenkrieg map. It also claims, sans explanation, that there is “Bagration action on the map.”   This may mean that one or more scenarios are set on this map that take place during the 1944 Soviet summer offensive (there was one such scenario in the original Bandenkrieg). As of this writing, Critical Hit is selling it for $79.95.

The second is Partisan Revenge: Eastern Front Partisan Warfare, released in 2018, which Critical Hit ALSO explains as “updating the map and situations from the former Bandenkrieg” and ALSO says “covers actions from parts of Bandenkrieg, plus new ones,” and ALSO says that the OBs are different.  What’s the difference?  Critical Hit claims that “the scenarios in this module have Ground Snow – making them a perfect fit for the WINTERIZED map. What’s more, you’ll find a batch of never before published scenarios from the secret PARTISAN archive.” So, this product uses the Bandenkrieg map, but a winterized version of it, and contains new versions of a number of Bandenkrieg scenarios, but its 8 scenarios may also include other actions. Partisan Revenge is also $79.95.

Well, let’s keep going. The third product is Cruel Bandits 1: Eastern Front Partisan Warfare, released in 2019.  It’s also $79.95.  Critical Hit’s marketing copy is minimal, but it says, cryptically: “This is the NEW map, Lens Nord scenarios – keyed to the map – with OB tweaks in each + special rules!”  This is the product Desperation Morale acquired for examination and the results are interesting.  First, it is a recycling of Bandenkrieg, but with major changes.

All counters are completely gone.

The map is redone with new artwork, using 6 glossy 12″ x 18″ heavy paper/light cardstock map panels to form the ostensibly historical map. It’s a pain to assemble the map panels, but only one scenario uses the entire map area. The map graphics are bright and generally attractive, except for the buildings. Critical Hit maps of this era have problems rendering buildings that range from mild to severe; in this case, the building artwork is closer to the “really bad” end of the scale, with some buildings blown up to the point that they are nearly blurs (hex N2, for example), other buildings cloned and stamped in many different places (one collection of small wood buildings appears in hexes O3, P1, P3, Z12, AA13, BB11, CC15, CC16, SS3, NN1, H37, G37, B37, B36, P31, P24, P25, P26, QQ31, P27, S28, S27, and T27); that’s just lazy. Two different locations are labeled “Tar Processing Furnace,” but neither actually seems to be the Tar Processing Furnace. Meanwhile, the hex labeled “The Schoolhouse” is not actually The Schoolhouse (it is open ground); the real schoolhouse hex (according to the rules) is several hexes away.

Cruel Bandits 1 comes with 8 scenarios, dropping the monster scenario that appeared in Bandenkrieg.  The scenarios here are substantially changed from their original versions.  Not only are the names changed–a common Critical Hit practice–but the numbers for the scenarios were changed, and the historical descriptions were changed.  The scenario OBs and special rules were also often significantly altered.  There is no hint that they were replaytested (just as there was never a hint about the original scenarios being playtested).

That brings us to Cruel Bandits 2: Winter Partisan Warfare, also released in 2019 and also $79.95. This product is described as “This is the NEW map, Partisan Revenge historical summaries – scenarios – keyed to the map – with OB tweaks in each + special rules!”

So are Cruel Bandits 1 and 2 simply very slightly changed versions of Operation Lens Nord and Partisan Revenge?  It would seem so. New names for the same products just a year later.

To make things even more confusing, at the same time as all these releases, Critical Hit also released, for separate purchase, variant versions of the maps. Or, rather, map, since all these products use the same map.

It’s one of the most confusing messes Critical Hit has produced and ASLers are advised simply to stay away. 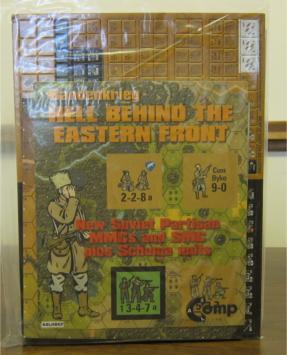