Baraque de Fraiture (BdF) is a historical module featuring combat during the Battle of the Bulge between the spearheads of the 2nd SS Panzer Division and Kampfgruppe Schumann racing towards the Meuse and a scratch force of American defenders that included remnants of the destroyed 106th Infantry Division (including the eponymous Major Arthur C. Parker III), elements of Task Forces Kane and Richardson from the 3rd Armored Division, and elements of the 325th Glider Regiment of the 82nd Airborne Division.

BdF was the creation of Front Line Productions, i.e., Nadir El Farra and Brian Abela, two southern California ASLers, and its physical quality is extremely impressive for the mid-1990s, from the attractive map to the beautiful scenario cards (every bit as nice as any “official” ASL scenario card).  At the time it was produced it had the best production values of any third party module, and its production values still hold up well today.

BdF had no campaign game, but included 9 scenarios, 2 of which used geomorphic mapboards instead of the included historical map.  The scenarios are a perfect mix (3/3/3) of small, medium, and large-sized actions.  One scenario is a Night scenario, several scenarios have OBA, many scenarios have Deep Snow, and many scenarios feature the super-scary M16 and M15A1 AA halftracks (sometimes even dug in!).  The scenarios have received a fair amount of play; particularly popular are BDF4 (Brief Breakfast) and BDF6 (The Gingerbread Men).  The two geomorphic map scenarios, BDF4 and BDF9 (Across the Aisne and into Freineux), were later reprinted as official scenarios in MMP’s Out of the Attic.

Unfortunately, Front Line Productions shut down after just one module.  However, their second project, a historical module featuring Edson’s Ridge on Guadalcanal, was eventually published in part as an “official” ASL product, Operation Watchtower.  Still, the quality of Front Line’s first module makes one wish that it had been the first of a series instead of a single child.

In 2007, Critical Hit acquired BdF, or at least the rights to print it, and issued a 2nd Edition Baraque de Fraiture.  It reprinted the module, with some additions, such as counters, in 2011, and has similarly been reprinted multiple times since then, with various tweaks and under different names. 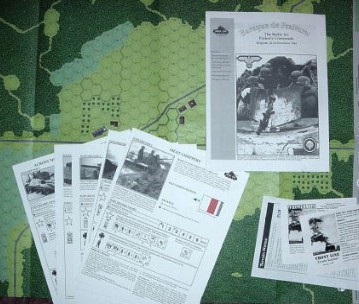