Industrious scenario designer Paul Kenny published Barbarossa North in 2005; this smallish scenario pack featured actions in northern Finland and the Soviet Union during World War II.  The scenarios are in black in white, with color nationality symbols and a couple of color photographs.

The editing and proofreading is haphazard at best.  At this stage, Paul Kenny was churning out scenario packs at the rate of two a year, so one must wonder at the amount of playtesting done as well.

Although the scenarios in this pack are all quite playable in size, this pack has not seen much play since its release.  The scenarios that have seen play do not give favorable indications of balance, with the possible exception of FE112 (Old Tactics, New Victims). 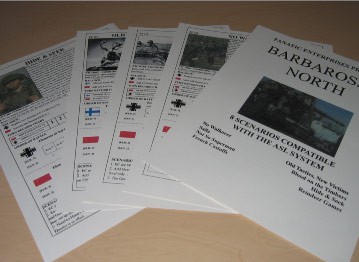