Battle of the Bracchi Hills (BBH), or to give its overlong full name, Battle of the Bracchi Hills:  On the Road to Rome–May 12-14, 1944, depicts actions from the 351st Infantry Regiment of the 88th U.S. Infantry Division attacking Mount Bracchi along the Gustav Line in Italy during the major offensive that finally captured Rome.  This module marked the beginning of a new phase of Critical Hit’s involvement with ASL, as it is a spin-off of a module originally created for Critical Hit’s ATS system.  For a number of years after this point, the majority of Critical Hit’s ASL products would be “ports” of products originally created and printed for the ATS system.

The centerpiece of BBH is its large historical map, dominated by a long ridge-line running down its length.  It is a very attractive map, colored with the earth tones typical of Critical Hit products of this period.  It also creates some really interesting tactical situations.  Unfortunately, in order to fit it into a ziplock bag, Critical Hit folded the map in a very awkward and irritating way, pretty much guaranteeing that the map will have to be played either laminated or under plexiglass.  Doubly unfortunate, this has become a standard practice for Critical Hit maps of this size.

A number of the scenarios in BBH are very small; in fact, BBH1 (Last Word), features just 4 American squads attacking 1 1/2 German squads.  This will not be very satisfying to many ASLers.  Luckily, there are more interesting scenarios among the dozen included.  The one that looks the most interesting is actually the largest scenario in the module, the only one that uses the entire map, BBH7 (Beyond the Right Tit).  It features a major American attack up the ridge.  It should be noted that 4 scenarios are Night scenarios.

This is a module which is worth a look.  It has a very interesting geographic situation and a varied set of scenarios.

2nd Edition (i.e., Hell in the Liri Valley) Comments:  Hell in the Liri Valley (HLV) is the latest in Critical Hit’s 2011-2012 attempt to rename/reprint/recycle/re-release almost its entire catalog within a short period of time.  It is basically a straight reprint of the original.  The map does not appear to have been re-done and it has the same scenarios (a few are marked 1.1, indicating the incorporation of errata).  The countersheet provided by Critical Hit is entirely superfluous and provides no useful or new counters but rather merely supernumary duplicates of existing counters.  There would seem to be no reason why any owner of the original product would want/need to purchase this version.

3rd Edition (i.e., Road to Rome) Comments: Renamed and Recycled, Battle of the Bracchi Hills is back again in 2015 as Road to Rome.  This edition contains Critical Hit’s new style of historical map, which uses glossy 12″ x 18″ heavy paper map panels that have to be assembled to form the historical map.  Assembling such panels are always a pain, though with only 4 panels, Road to Rome is far more manageable than CH products with larger maps.  The maps are glossy, which causes glare, but tend to provide brighter color.  That is not quite as true here as for most other modules, as the brown and green tones are still fairly muted on the Road to Rome map.  The artwork seems to be the same.  The countersheet is also the same, though there is only one sheet in this edition, rather than the two duplicate sheets of the previous edition.  It doesn’t really matter, because all of the counters are superfluous.  The rules illustrate the hasty nature of the conversion, as in the second paragraph they state “The rules that follow apply to all scenarios played on the Suwejo Heights map.”  That is a reference to a different Critical Hit product, not this one; clearly, Critical Hit just re-used the Suwejo Heights rules template and did not successfully remove all the references to the other module.  This edition is an advantage over the original edition because of the bad map folding of the product, but otherwise is not really much of an improvement over past editions.  At $69.95, Road to Rome is overpriced. 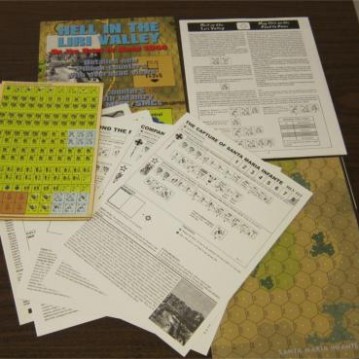