Home > Products > Battle of the Hedgerows: The Storm Broke

Lone Canuck’s second publication in 2006 was another themed mini-scenario pack.  The theme of this pack is a highly unusual theme for its designer, George Kelln, as it features American troops:  the defensive stand of the U.S. 30th Infantry Division (especially the 2nd Battalion, 120th Infantry Regiment, the surrounded “lost battalion” that distinguished itself so bravely) that blunted the Mortain offensive in Normandy in 1944, sealing the doom of the German army in France.

In some respects, the pack seems a little bit like a historical module.  Although it uses geomorphic maps, it uses the same three geomorphic boards in 5 of the 6 scenarios (the 6th scenario actually uses board x from the ASL Starter Kit 2 as one of its maps).  Most of the scenarios are quite small; many of them feature 6 or 7 squads on a side, plus an AFV or two (making them useful scenarios with which to introduce AFVs to novice players, were it not for the bocage, which every scenario has).

One scenario, BH6 (The Attack on Hill 32), is the “monster” of the pack, featuring 19 U.S. squads and 5 AFVs attacking 12 German squads and 3 AFVs, with OBA for both sides.  Another scenario, BH2 (The Hunter or the Hunted?), has 13 U.S. AFVs trying to get past 4 German AFVs and a bunch of halfsquads with Panzerfausts and Panzerschrecks (it doesn’t look very fun).  The remaining 4 scenarios, however, will play quickly and look interesting. 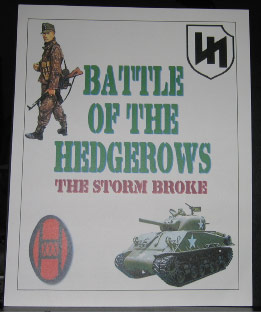