Contents:
One issue had 4 scenarios

Battleplan was a short-lived wargaming magazine that featured variants, scenarios, and strategy articles for the wargaming world.  Battleplan had Squad Leader scenarios in most of its issues, but for some reason was slow to begin supporting Advanced Squad Leader.  However, in its very last issue, Battleplan #9, it published four ASL scenarios that had been used in an ASL tournament in Michigan.

This issue contained four scenarios created for the 1988 Michicon ASL tournament.  They are rendered in a non-standard format that aesthetically will displease most ASL players.  However, the scenarios were reformatted in the early 2000s and are available for download here.  Each scenario features a different aspect of the ASL rules, like night or air support. 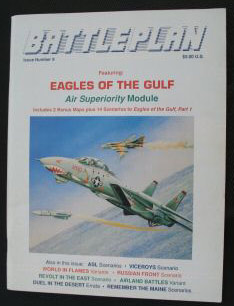