Battles Magazine is a general wargaming magazine edited and published by Olivier Revenu of France (the magazine, however, is in English, in an attempt to capitalize on an international audience).  According to Revenu, he wanted to create the “ultimate wargaming magazine, the counter-pusher’s Bible, a Nirvana-in-print for the amateur strategist.”  That’s an ambitious goal–so too is its planned quarterly publishing schedule (beginning in 2010, after a 2-issue 2009).

What is most impressive about Battles Magazine is its extremely high production values.  The 132-148 page magazine (page counts from its first two issues) is in full color with high quality graphics.  Clearly inspired to some degree by French wargaming magazine Vae Victis, which also has a game in each issue and similar content, its production values surpass those of the older magazine, including a separate game map and mounted, die-cut counters.  Other content includes numerous game reviews, strategy and analysis articles, interviews, scenarios for a variety of game systems (including ASL), and more.

It’s a good magazine, both in terms of content and production quality (the English is sometimes a bit sloppily translated, though).  The only real question is whether or not it can survive financially with such high production values vs. such a niche audience.  Hopefully, Battles can somehow find a way to stick around for a while.  It is well worth trying.

2014 Update:  Battles’ schedule has gone fro quarterly to occasional to once in a blue moon and its future is in doubt. 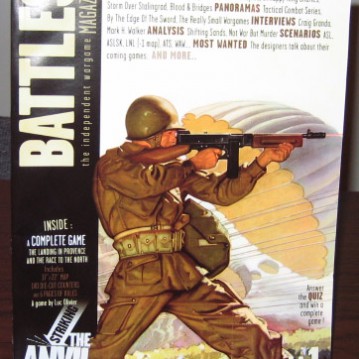