2nd edition: 26" x 33" historical map, plus above contents, except for the countersheet, which is only available in unmounted form as a PDF file at http://www.heatofbattle.com/pdf/brv_fc.pdf. Early copies of the 2nd edition may have included the countersheet. The 2nd edition includes only black and white copies of the non-map contents (the map is still in full color). The larger map was also available for purchase separately.

Heat of Battle’s fourth historical module offering takes ASLers to the final days of the Third Reich; Berlin: Red Vengeance (BRV) focuses on the battle for the Reichstag in Berlin in April 1945.  It features a historical map of the Reichstag and the surrounding area, including the Spree River.

The hand-painted map graphics, by Eddie Zeman, are typical of early HOB modules, which is to say not bad, but not remarkable, either.  The small countersheet was HOB’s first attempt at die-cut counters and the counters look quite nice (they were designed by the talented Nadir El-Farra).  There are a baker’s dozen German leader counters, gun cupolas, turret counters, Soviet fighter-bombers and artillery pieces, and barricade counters, plus a few counters for God Save the King and King of the Hill.

To create the feel for the Battle of Berlin, BRV’s designer included many special rules. Most deal with terrain, such as the Spree River and its bridges, the Reichstag, and the Flak Towers, but there are new counters, such as barricades, and new units–Nazi Party leaders and Gestapo leaders–both of which function in ways similar to commissars.  A nice chromey touch is a rule for “Red Banners,” the successful placement of which in certain scenarios may gain the Soviet player victory points.  Campaign game rules also provide for the liberation of Soviet prisoners of war.  Unfortunately, there is also an Adolf Hitler counter–a decision of questionable taste– the rules section for this counter simply says “TBA,” but rules for him later appeared in Heat of Battle’s second Waffen SS scenario pack.

The scenario cards in BRV no longer use a layout that replicates the “official” ASL scenario layout.  Two scenarios use geomorphic mapboards; the remaining 8 use the historical map.  There are a nice mix of different sized scenarios.   With one exception, the rules are light on long or complicated SSRs; the exception is BRV9 (Jail House Rock), which represents the liberation of Soviet prisoners.  The scenarios have little in the way of OBA, air support, or other more complicated rules.

Some of the scenarios of BRV aren’t very balanced, but the campaign game ostensibly is.

The first edition of BRV had a fair amount of errata, though this was incorporated into the second version.  Overall, BRV enjoys a pretty high reputation among ASLers and is considered to be one of HOB’s better products.

The small countersheet that comes with BRV also contains some counters for God Save the King and King of the Hill. 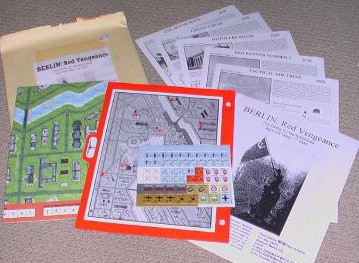