Biazza Ridge is an ASL historical module depicting fighting on Sicily between American and Axis forces shortly after the Allied landings in July 1943, concentrating on the German counterattack against the landing.  The product is also one of two inaugural products–along with Brevity Assault–debuting in 2020 by the new, Italian-based third party publisher Advancing Fire.  Biazza Ridge was designed by Sebastiano Caltabianco.

One can’t fault Advancing Fire for not being ambitious.  Most ASL third party publishers start with something simple, like a scenario packs, and work their way up to more complex and difficult projects.  Advancing Fire eschewed the conservative approach, instead releasing not one but two complex ASL products requiring significant playtesting and development and posing substantial hurdles in terms of graphic design and physical production.  Of the two, Biazza Ridge is the more straightforward (its sister product actually adds an operational-level component to ASL) but even this product is laden with multiple historical maps plus a campaign game.

ASLers should keep in mind that Biazza Ridge and Brevity Assault are the first products of a new company and any inaugural products are bound to suffer from growing pains.  That is certainly the case for Biazza Ridge, where the physical production quality in particular suffers in a number of regards. One hopes that the physical problems of Biazza Ridge will not appear in future products, but Biazza Ridge is also a promising first effort in several respects and it is always good to support new third party publishers.

The scenario cards are printed in color on thin, glossy paper, not on cardstock, so they are attractive but not necessarily durable, and should be treated carefully.  This is a recurring theme for the product, which has attractive but mostly flimsy physical components. Only one of the 10 scenarios fits on a single page, which is annoying.

The single campaign game (also dubbed Biazza Ridge) focuses on the defense of the Gela beachhead by the U.S. 45th Infantry Division and 82nd Airborne Division from a large-scale attack by the Hermann Göring Panzer Division. It has 6 campaign game dates–but there are no campaign purchases.  Both sides operate with OB-given at-start forces and reinforcements.

The 16 pages of rules (which include designers notes and maps) are mostly dedicated to the refit, etc., elements of the campaign game. Only around 4 pages of rules must be absorbed to play scenarios, almost all of which delineates map terrain features.

By far the most distinctive–and perhaps confusing–map terrain feature is that Slope hexsides appear in Biazza Ridge but not as Slopes. Rather, Slope hexsides indicate Hillocks–and if you’ve ever wondered what hillocks would be like as part of a very hilly map, well, this is the module to you.  The presence of so many hillock areas effectively creates half-height terrain levels among the hills and it’s quite confusing even with examples of play and even though the maps contain crest lines of different colors to help players understand the relationships between different hexes. The other terrain features are not nearly so bewildering, but the hillock stuff is enough to annoy.

It is obvious that the rules were written by someone for whom English is not their native tongue, but the English doesn’t seem hard to parse or understand.

The rules themselves, it should be noted, are printed in color on thin matte paper as unbound (i.e., loose) sheets of paper without binder holes. Players will need to punch their own holes, if they wish to store the rules in a binder, and may well want to protect the thin sheets with page protectors as well.

The maps of Biazza Ridge are at the same time the product’s greatest strength and also its greatest weakness. The problem with the maps is that they are 1) quite large, 2) printed on the thinnest, flimsiest paper one could possibly imagine, and 3) folded into many folds.  The combination of all these factors is that they could tear at the drop of a hat and infinite care must be taken when unfolding any of the maps.  As for playing on them, forget it.  Putting the maps under plexiglass or some similar substance is definitely necessary unless players make their own, more durable copies of the maps.

This is a particular shame because the maps are, in general, rather attractive.

In general, the map artwork is crisp and the colors chose are pleasing to the eye.  The terrain itself is often complicated and layered, producing juicy little tactical wrinkles.  However, the maps have drawbacks as well.  First is hex size.  The maps use standard geoboard hex sizes rather than the larger hex sizes that appear in HASLs like Red Barricades.  Some ASL players do not like such small hex sizes for HASLs.  Second, regardless of terrain color, from light green to dark brown, hex numbers always appear in black.  This makes a hex numbers on dark terrain hard to read. Finally, some terrain types–notably orchards (and orchard-like terrain) and buildings have heavy drop shadows.  On the inherent terrain orchard (et al) hexes, the shadows have no real practical effect but just make the terrain seem somewhat fuzzy.  However, the thick dark shadows around all the buildings are quite likely to cause disputes over LOS from time to time (and also make the buildings seem fuzzy).

The Ponte Dirillo map is one of the smaller maps; a squarish map featuring a fair amount of dark green and dark brown terrain.  It features 10 different terrain levels (including the -1 stream level); the terrain increases in height as one moves south to north.

The Abbio Priolo map is a long, rectangular map that generally  rises towards its northern end.  It has nine terrain levels. Again, much of the terrain is dark brown or dark green.

The Gela Farello map is a rectangular single-level map featuring mostly open ground depicted in a dark, mottled green.  Hex numbers are hard to read. A miniature landing strip (for toy planes?) appears at one end.

The Piano Lupo map, like the Ponte Dirillo map, is smaller and squarish and virtually all bornw, with only small portion of the map set at level 0 and colored green (which makes one wonder why some other, higher level wasn’t chosen for level 0). Almost every corner of the map has hill protrusions. The map features seven different levels (if one includes the -1 gully).

The Biazza Ridge map is the largest map of the bundle–and the one used for the campaign game as well as scenarios, meaning that it will probably be the most use map as well.  Unfortunately, Advancing Fire chose to print the map in one huge piece, rather than two mating pieces.  As a result, the large, squarish map is an ungainly folded monster that is very vulnerable to ripping. The map has fewer dark green valleys or dark brown peaks, so overall it is slightly easier to read and has a brown or mustard hue. Still, players will want to use this map in a very well-lit room.  The terrain–festooned with orchards, vineyards and the like, does look interesting to fight over. This map also makes far less use of slopes/hillocks than most of the other maps.

Generally speaking, the maps of Biazza Ridge are attractive, though somewhat dark and hard to read (and with fuzzy shadowy buildings), and interesting, but really hindered by their flimsy physical quality that will require constant kid-glove treatment.  Hopefully Advancing Fire will learn a lesson from these maps and, in the future, 1) make the maps brighter, sharper, and easier to read, 2) increase the hex size somewhat, and 3) print all maps on much sturdier paper, and 4) split large maps into more than one section.  All four changes are probably needed.

Biazza Ridge also comes with a small number of die-cut counters that have also proved controversial, though in the opinion of Desperation Morale, it’s not really a big deal for this particular product due to their small number.  The module comes with 36 counters (20 that are 1/2″ and 16 that are 5/8″).  These include 10 1/2″ American counters–7 Assault Engineer MMC and 3 historical leader counters (Jim Gavin is a 9-2)– and 10 1/2″ German counters, including 6 Assault Engineer MMC and 4 x 2-7 LMG counters.  The mini-sheet also includes 16 5/8″ German counters, 12 of which are trucks of various kinds and 4 of which are halftracks with 20L gunmounts.

The counters have attractive graphics, though some of their colors are off (the American counters look more like Allied Minor green counters than American green counters).  The main problem with the counters, though, is that they were die-cut “backwards” or “upside-down,” depending on how one looks at it.  The fronts of these counters, thanks to the diecutting impressions, essentially look like counter backs, and vice versa.  Nor is the diecutting of the 1/2″ counters all that great.  The counters are also glossy, which is a turnoff for some ASLers (as “official” counters are not).

All of this has produced complaints by some ASLers, though perhaps more for its sister product (which has far more counters) than for Biazza Ridge. Advancing Fire has said they plan to reprint the counters in a future product, which is certainly nice of them.  It’s important for them to get counters right if they want to continue to sell to an ASL audience, but the counters (by their nature and number) are a very minor factor in this particular product.

Biazza Ridge was designed and playtested by a relatively small group of people, including some seemingly with limited experience in this regard, so the product does come with a little bit of a risk in terms of play balance as well as clarity or errata, but this is often the case for a new third party publisher. Hopefully Biazza Ridge will turn out to have a strong foundation and that its creators will improve upon the physical quality in their future products. 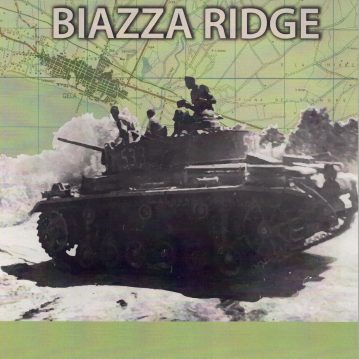