The Big Baby Sniper! (exclamation in original) die is the second of the “baby” themed dice released by Battleschool, which are simply 1/2″ (12.5mm) custom dice (as opposed to the other, larger sizes that it has used:  9/16″/14mm and 5/8″/16mm).  Thus the oddly named “big” die is really a smaller die and is basically a smaller variant of the older sniper die Battleschool previously released.

The older, larger die replaced the 1-pip and 2-pip sides of the die with custom sides, one with an image and summary of effects of a “1” sniper dr and the other with the same for a “2” sniper dr.  This smaller version drops the effects, to save space.  It is also more practical than its predecessor, changing the images to make the results more immediately obvious (i.e., the “2” sniper side of the die includes two tiny images whereas the “1” sniper side includes a single, larger image). 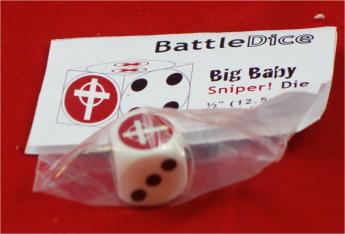