BEG does not use geomorphic mapboards; rather, it is played on the large desert mapsheet found in either Afrika Korps-El Alamein or Afrika Korps-Battle of Gazala; thus, one or the other of those products is required to play this product, as is some version of the Platoon Leader rules. Critical Hit considerately provides an updated version of the Afrika Korps rulebook in BEG that apparently has errata incorporated into it from the original version.

The concept behind the Afrika Korps products is to use one or more large generic desert maps as a base, then populate them with a variety of overlays, both generic and custom, in order to “build the battlefield.” BEG comes with 12 overlays on 3 sheets, overlays that range in size from very small to massive (12 hexes by 22 hexes, to represent a large hill position). Desert terrain tends to be bland, so there is nothing striking about these overlays, but they are perfectly fine.

BEG comes with a “Force Organizer” play aid and also a small countersheet, which was thrown in only to entice purchasers by the whiff of counters. It is a duplicate of one of the sheets appearing in an earlier Afrika Korps product and not needed for this campaign game (it even includes 17 American counters!). It is just as well that it is not needed, as a few of the counters have fronts and backs that do not match up (apparently transposed).

Scott Holst included 2 scenarios and designer’s notes with his submission to Critical Hit, but none of these were included by Critical Hit in BEG.

Bir El Gubi takes place in Libya in November 1941 during Operation Crusader, the failed British counterattack to break the siege of Tobruk (ignore the campaign game card that at one point claims the date is July 1942; that is a typical Critical Hit sloppy mistake). It depicts the British 7th Armoured Division’s attack in the battle, an assault which ran right into the Italian “Ariete” armored division, which had only recently arrived in theater. To the surprise of the overconfident British, the Italians stopped the British attack cold on the first day. Subsequent lesser attacks in the next couple of days were no more successful. The Italians had destroyed around 50 British tanks while losing far fewer of their owns–it was a relatively rare battlefield success of which the Italians in North Africa could be proud.

The campaign game is quite manageable in size, with 6 CG dates. Both sides have a number of different purchase options. The setting, a well-matched British-Italian armor clash, is enticing. Given that the only other currently available desert campaign game options are Birs El Gubi, Easter at Tobruk, and El Alamein: The Battle of Ruweisat Ridge, fans of ASL desert action might well be drawn to this campaign game.

2016 Note:  In 2016, Critical Hit published a new version of the Bir El Gubi campaign game in CH Annual Issue 3; see that link for details. This version contained a historical map instead of a generic one and also includes the designer’s and one of the two scenarios that Holst originally submitted.  Holst is also properly credited in this version. Fans of Bir El Gubi might wish to get this version because of the dedicated map. 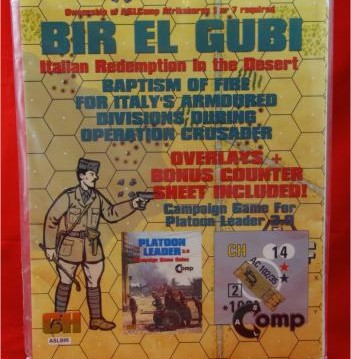