The fructiferous efforts of Paul Kenny enabled this massive scenario pack, Kenny’s largest to date, featuring early war actions during the Germans’ conquest of Western Europe and the Balkans.

The scenario cards are typical for Fanatic Enterprises at this time; black and white (except for nationality symbols and the occasional color photograph) with no counter artwork.  Proofreading and editing is, to say the least, lacking.  It was clear by now that Paul Kenny was designing scenarios at a rate that outstripped his ability to playtest, develop, and publish them with sufficient quality control.  The year 2004 alone saw 34 scenarios published.

The actions depicted include 7 in Poland 1939, 1 in Denmark 1940, 1 in Norway 1940, 5 in France 1940, 1 in Greece 1940 and 1 in Greece 1941, and one from the Soviet Union in 1941 (featuring Romanians).  They definitely trend towards the large; there are 6 small scenarios and 1 medium-sized scenarios, but the rest are all large.  Many scenarios are vehicle-heavy, and there is one all-armor scenario and two scenarios that are almost all armor.

Since their publication, the scenarios have not been played very much. 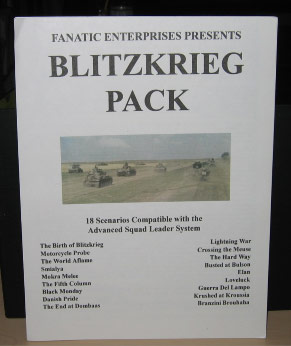