Blood & Iron has an attractive historical map, dominated by muted earth tones.  About this time, the map graphics used by Critical Hit finally seemed to stabilize and all of its historical maps of this era in CH history had a similar and consistent look (consistency on the part of Critical Hit is always appreciated, though rarely found).  There are interesting terrain features such as razor-back ridges.

The majority of scenarios (7 of 10) utilize caves, so players need to be familiar with the cave rules.  Critical Hit provides a play aid with pre-determined cave complexes to make play easier, but the use of caves may scare some players off (as might the occasional appearance of irrigated rice paddies).   Scenarios definitely tend towards the small end of the scale in this module.  The smallest is IP8, Fists and Fury, a 4-turner which easily can be decided by a single die-roll.  It features 9 Japanese squads attacking from a variety of different directions against 2 American squads and 1 half squad.  However, the Americans also have a 10-2 leader and two heroes (leading to the possibility of a rarely seen -6 fire drm).  In this scenario, it is a race between the American player zapping Japanese units to oblivion and the Japanese player hoping to break units in the tiny American order of battle.  Luckily, the module does feature more meaty scenarios than that.

The specialized nature of Blood & Iron insures that it will never be one of the more popular modules.  But PTO enthusiasts should definitely take a look.

2nd Edition (Okinawa: Battle for the Item Pocket) comments:  Many years after its first edition, Critical Hit renamed, revamped and re-released Blood & Iron in 2018 as Okinawa: Battle for the Item Pocket.  This version contains a new, larger (both in size and area covered) map using 12 glossy 12″ x 18″ heavy paper/light cardstock map panels that must be assembled to form the map.  Assembly is a chore but most scenarios don’t use the full map area.  The map artwork is brighter and nicer than the original artwork.  This edition also contains two additional scenarios, Into the Mouth of Death and Amtracs on the Horizon, though where they came from is unclear.

At the same time this edition was released, Critical Hit also made available, for separate purchase, a “Monster Map Set” with the Item Pocket map rendered with large-sized hexes. 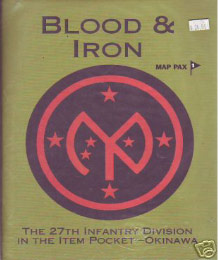