Heat of Battle’s Blood Reef Tarawa (BR) is one of the rarer ASL products, yet it is almost forgotten because it was expanded and republished by MMP as an official HASL module.  It is the MMP version which gets all the attention.   However, only 250 copies of BR were printed by HOB.

Blood Reef Tarawa, designed by Steve Dethlefsen and Eddie Zeman, depicts the invasion of Betio of the Tarawa Atoll in the Gilbert Islands chain in November 1943 by the United States Marine Corps.  That bloody battle highlighted some of the weaknesses in U.S. amphibious operations and showed how formidable dug-in Japanese defenders could be.  Lessons learned the hard way on that palm-strewn island helped the United States get closer to Tokyo.  BR was the first amphibious landing recreated in ASL with historical maps, and also the first historical module featuring the USMC (there would be many more).  While the later MMP version of the game used two historical maps to depict virtually the entire island, the original Heat of Battle version only used one map, depicting the island’s western half.

During its development, Heat of Battle offered BR to Avalon Hill, who took no action on it.  However, after MMP started managing ASL operations for Avalon Hill in 1996, they thought the subject worth pursuing and contacted Heat of Battle to talk about obtaining the rights.  However, various things, including the purchase of Avalon Hill by game company Hasbro, caused lengthy delays.  It was during this time period that Heat of Battle went ahead and printed a limited number of copies of BR (one advertisement for the game actually refers to it as Death Tide:  Tarawa).  Later, however, Heat of Battle and MMP (now licensing the right to make ASL products from Hasbro) came to agreement, and this led to BR being expanded and developed as an official ASL release.

Heat of Battle’s BR contained 8 scenarios, 2 of which used geomorphic mapboards (BR1, A Piece of Folly, and BR2, Damn Army) and 6 that used the historical map (a map that was much less polished than the later MMP version).  Of those 6 scenarios, the titles of 4 appear in the “official” Blood Reef Tarawa, but the scenarios generally have substantial differences.  The 3 campaign games have 4, 8 and 12 campaign dates, respectively.

Because the later version of the game offers a fuller playing experience, including the sense of invading and capturing an entire island, most ASLers interested in this subject will probably prefer the official version of BR to this, its first iteration.  However, people who already own the module can be content that they own a very rare ASL item. 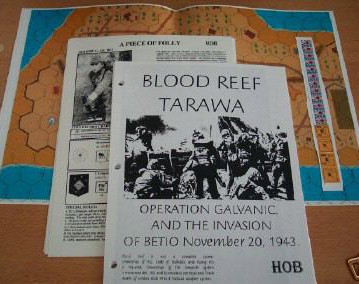