2nd Edition: As above, but different layout and with some changes

Break Contact came onto the ASL scene like found money:  unlooked for and unexpected, but appreciated.  However, like found money, many may consider it hard to find.  It is basically only available from one source, the Australian games e-tailer Warchest.

Some of the scenarios are a little quirky.  For example, one of them has an SSR that says hedges do not exist, but uses an orchard overlay to replace an orchard surrounded by a hedge–exactly the same effect either way, with the only likely result that the player will be confused and wonder if an open ground overlay was what was really intended.

In 2007, Break Contact created a slightly revised version of the scenario pack.  The new version has the same scenarios, but a completely new layout.  The new layout–which includes original counter artwork–is superior to the original layout.  In addition, some changes have been made to some of the scenarios.   However, this 2nd edition was not produced for sale but only in very limited quantities for tournament prizes, etc.

Several of the scenarios turned out to be pretty decent, including BC2 (Put to the Sword) and BC3 (42nd Street).  The best scenario in the pack, BC7 (Brigade Hill), is a great tournament scenario.  It was later reprinted as an ASL Journal scenario (J116), where it got a lot more play than in its Break Contact version (though the two are essentially identical).

The pack is worth getting, if you can find it. 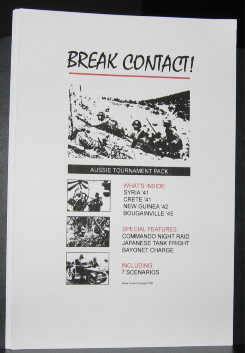