Breakout was a more or less quarterly gaming magazine published in Australia from 1981 to 1991.  Because it covered every aspect of the gaming field, from miniatures to board wargames to play-by-mail games (a dead genre) to computer games to role-playing games, its coverage of any single area was necessarily thin.  Over time, it tended to gravitate more towards role-playing games. However, it was really the only gaming publication of its type in Australia at the time.  It folded after about 45 issues and 2 special issues.

During its run, it printed ASL scenarios three different times. 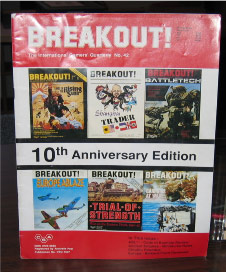