Although Streets of Fire and Hedgerow Hell were the only DASL modules ever released by Avalon Hill, the company did later release a set of AFV cards for British vehicles, to complement the German, Russian, and American ones that came with the modules.  It was available for order directly from Avalon Hill.  Because only a few ASLers found any utility to the AFV cards, it was never a particularly popular product. 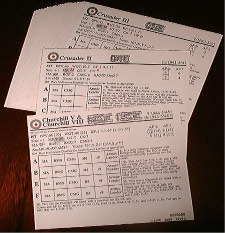