It is difficult to know what to call Kinetic Energy’s British Rare Vehicles product.  With only two scenarios, it certainly isn’t a scenario pack.  Perhaps it would be best to call it a “counter pack,” because the lure here is the attractively produced set of die-cut counters representing a variety of British rare vehicles.  The Chapter H notes provide detailed information to go along with these counters.

This product was at one point apparently the theme around which an issue of Time on Target or some other fully fleshed out product would be built.  However, in the end, it was just given away to attendees at the March Madness ’99 ASL tournament in Kansas City, Kansas.  At this point, Kinetic Energy itself only had a couple more months to live before its principals called it quits altogether.

The two scenarios that came with the pack were BRV1c (Charge of the Bison), which actually featured not the British but the French in an action at Dien Bien Phu in 1954, and BRV2b, The Mines of February, a night/desert scenario taking place in Egypt in October 1942 between the British and Italians.

This product was produced in only very small numbers and was never generally made available.  Over the years following KE’s demise, ex-KE figures such as Mike Reed would occasionally auction off a copy or two at ASL tournaments.  As a result, it is a true ASL collectible, and when copies of the product do become available, they usually sell upwards of $100. 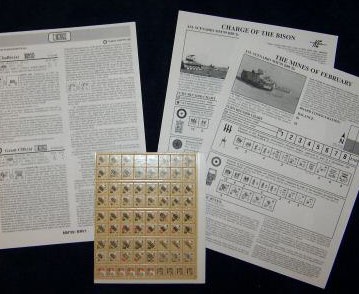