Buckeyes! was Heat of Battle’s second “guest designer” scenario pack (the first was Tropic Thunder!), with Mark Pitcavage pinch hitting as designer rather than the usual Heat of Battle team.  Like Tropic Thunder!, Buckeyes! is a themed scenario pack that takes place in the PTO.  In this case, the theme is the U.S. 37th Infantry Division on the Solomons islands of New Georgia and Bougainville in 1943-44.  The rationale behind the scenario pack was to design a unit history pack on an “average” World War II unit rather than some elite SS, USMC, or airborne unit.  The designer chose the 37th Infantry Division because he lives in Ohio and the 37th was formed from the Ohio National Guard.  The idea for the theme is in one way a refreshing change from the endless series of packs and modules featuring elite units; on the other hand, saying the “37th Infantry Division” does not create the same interest level that saying the “82nd Airborne Division” or “1st SS ‘Leibstandarte’ Panzer Division” would.  Buckeyes!, therefore, is more of a blue-collar scenario pack; there is not much that is “sexy” about it.

Of its ten scenarios, two are small and the others are mostly medium, with several large (though only one, Buck 8, Cut Slash and Mow them Down, is more than borderline-large).  One of the scenarios, Buck 9 (To Take Back A Hill), has a variable size; the U.S. player can choose to launch a hasty, delayed, or prepared attack, with different OBs and victory conditions depending on the choice.  Two of the scenarios are night scenarios, although one of them only uses some of the night rules.  One of the scenarios uses the Nhpum Ga map (from ASL Annual 97); the rest use geomorphic mapboards.  There are no caves, amphibious landings, rice paddies, or panjis.  One scenario, Buck 7 (Up the Numa Numa Trail), features Fiji troops, as well as unarmed native carriers.  Other scenarios include features such as variable OBs and walking wounded.  Only two scenarios feature tanks; the others are infantry vs. infantry actions.  Several of the scenarios feature wholesale terrain changes (such as “all jungle hexes are treated as palm tree hexes”); these are not popular with some players.

The pack is relatively errata free (the moon was left off the two night scenarios, and the map graphics, though not the board numbers and orientation, are incorrect on Buck 1, Welcome to the Jungle; this scenario should also have 11 rather than 10 initial U.S. squads, though this is a balance erratum added later).   The most played scenario, Welcome to the Jungle, designed as an introductory PTO scenario, was originally unbalanced in favor of the Japanese and garnered considerable criticism at first (thus the errata above adding a squad to the U.S. forces).  Several of the scenarios (Buck 3, Hell on Horseshoe Hill; Buck 7, Up the Numa Numa Trail; Buck 5, Men Remembered Well; and Buck 10, Buckeye Blitzkrieg) are scenarios more likely to see Japanese wins the first time they are played, but are probably more balanced on subsequent playings once players figure out how to play the other side.  In many of the scenarios, the onus is on the attacker to be aggressive (in Buck 1 and Buck 7, the burden may be on the defender).

The most popular scenario may be Buck 4 (Flamin’ Frank); the author’s favorite is Buck 7 (Up the Numa Numa Trail).  The least popular scenario is Buck 1 (Welcome to the Jungle), because of perceived balance issues, but hopefully the balance errata fixes that problem.  The overall reputation of Buckeyes! since its release has been that it is decent but not stellar.  This is probably to be expected from a pack created by a first-time designer.

The bottom line is that this scenario pack provides a number of meat-and-potatoes PTO scenarios.  Some have interesting situations and SSRs, and none have the “complicated” PTO elements such as caves.  PTO enthusiasts are likely to enjoy this pack; for others, it may be a little too jungly.   The designer of the scenario pack is the author of this description. 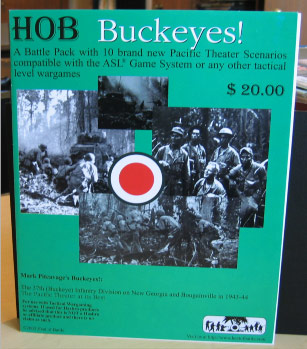