The BudaPack is not a scenario pack but rather a pack of dice, designed to “enhance” the playing experience of Festung Budapest, the MMP HASL set during the Battle for Budapest in late 1944/early 1945.  Priced at $75, this set of 8 precision dice is more than half the cost of the actual module ($130), so it is definitely only for fanatics, completists and ultimate Budafanatics.

The set actually can be divided into three subsets.  The first subset is the German subset, which consists of 1 white die and 3 colored dice (2 blue, 1 black).  The white die features a German military cross and the words “Festung Budapest” where the 1-pip would normally be.  The three colored dice feature, on the 1-pip side, the divisional symbols for three of the German units that took part in the battle:  the 13th Panzer Division, the Panzergrenadier Division Feldhernhalle, and the 8th SS “Florian Geyer” Cavalry Division.

The set is certainly attractive and, for the one-percenters of the ASL world, an interesting trophy to acquire.

Two caveats should be noted.

The first is that these dice are 5/8″ in size, which means that they can get caught in smaller/narrower dice towers.  Owners of such devices take notice.

The second caveat regards the German dice.  Two of the divisional symbols depicted on the dice have connections to white supremacist hate symbols.  The divisional emblem of the Florian Geyer division is itself a minor hate symbol and can be found occasionally as a hate tattoo on white supremacists.  However, the symbol of the Feldhernhalle is a wolfsangel emblem, which is today one of the major hate symbols, commonly used by used by neo-Nazis, racist skinheads and white supremacists around the world (and forms part of the logo of the infamous neo-Nazi group Aryan Nations).  The symbol is banned in Germany.  Because of this, some people might feel uncomfortable purchasing or using that die. 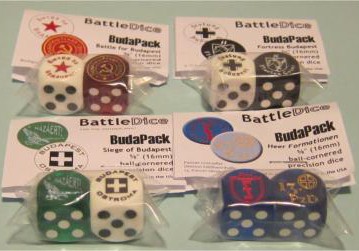