ASLers should read the Desperation Morale write-up for the first GWASL module to understand the nature of this series. That module (as well as Cambrai I and Cambrai II) is also required in order to play this one.

Cambrai II is one of several expensive (at $89.95) sequels to Cambrai I, a GWASL product by Critical Hit purporting to focus on the First World War battle of Cambrai in 1917, notable for its use of tanks by the British.

The product includes an ostensibly historical map, a couple of pages of rules, and eight scenarios on cardstock.  The module appears to require no new counters of its own but Critical Hit claims that “bonus” counters of “publisher’s choice” will be included, which usually means that Critical Hit will throw in a random countersheet from some previously published product.

At around the same time as Critical Hit released this product, it also released–for separate purchase only–alternate map sets for it.  One, dubbed a “MONSTER Map Set” features larger-than-usual hexes; the other, dubbed the “Uber MONSTER Map Set,” features even larger hexes still.  Neither one seems like a very practical idea. 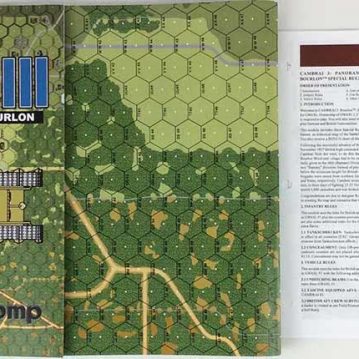