The scenarios in this small pack were designed by Jim McLeod in the late 1990s and produced for the benefit of the Canadian ASL Association.  They originally appeared in CASLA’s newsletter, Maple Leaf Route. According to Jim McLeod, they were briefly offered for sale (allegedly without permission, possibly through miscommunication) by Lone Canuck, but Lone Canuck stopped selling them at the request of McLeod.  Details on these scenarios.

McLeod later gave permission for the British ASL newsletter, View from the Trenches, to reprint the scenarios; these are still available as free downloads in the VFTT format (see Issues #32-35).    The VFTT and Lone Canuck versions are probably how most ASLers became acquainted with the scenarios, rather than in their original CASLA versions.

The half-dozen scenarios all feature Canadian troops in action, including Hong Kong 1941, Normandy 1944, Germany 1945, and Netherlands 1945.  Most of the scenarios are quite small (the largest force has only 11.5 squads) and play very quickly.  They may well have been designed for tournament play.  One scenario has OBA (a Creeping Barrage).  There is no air support or Night rules.

In general, the scenarios are quite well balanced and are pretty fun.  The most popular is MLR1 (Hana-Saku), the Hong Kong scenario (one of the few PTO scenarios to be published by Lone Canuck).  However, also well worth trying are MLR2 (Troteval Farm), MLR3 (Mooshof Melee) and MLR4 (Sneek Attack).  All can be played in an afternoon.

These scenarios were revised and reprinted, along with three previously unpublished scenarios, in 2012 by the Winnipeg ASL Club as Elite Canadians:  The Scenarios of Jim McLeod. 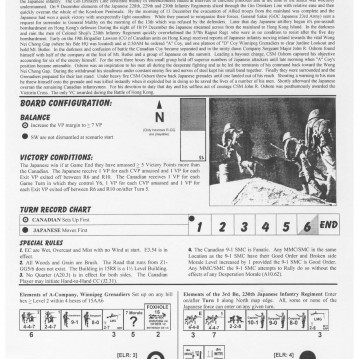