Canada at War #2 (CaW2) is a tiny scenario pack released by George Kelln in 2002, featuring Canadian troops in action in France, the Netherlands, and Germany in 1944-1945.

It features 2 small scenarios, 1 medium-sized scenario, and 2 large scenarios.  The Canadians are the attacker in all of them.  Two scenarios have OBA.

One of the small scenarios, the tiny CaW8 (Fire and Brimstone), features Badger flame-throwing tanks.  Another scenario, CaW11 (Operation Wellhit), features AVRES with fascines, Crocodiles, and Sherman Crabs (in addition to other toys).

Given that this is the fifth scenario released by George Kelln in 2002, one must be suspicious of the quality control and playtesting involved.  The ROAR results to date, though spotty, are not promising. 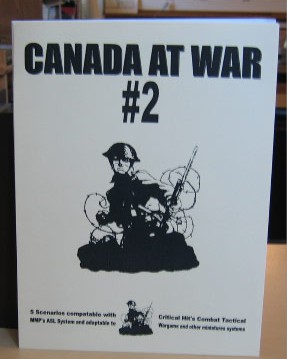