The Canadian Wargamers Journal was a relatively low production quality ‘zine devoted to wargames, featuring variants, strategy articles, and similar items.  Although amateurish, it really served as Canada’s de facto wargaming magazine for a decade (it was published from 1985-1996).

Its ASL content was very slight (CWJ was much more interested in World in Flames than ASL) and of poor quality.  During its run, it published a total of three scenarios. 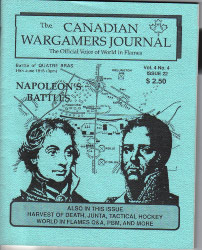