Carnage at Cassino is a historical module designed by Randy Yeates that offers looks at a variety of the bloody struggles involving French, American, Indian, Polish, New Zealanders, and Germans to control the high ground near Cassino, Italy, in the winter and spring of 1944.  It is one of only a very few historical modules depicting actions in Italy, despite the 21 long months of grueling warfare on the peninsula during the Second World War.

For ASLers, one of the more unusual aspects of this module is the tremendous range in time that it covers–actions depicted occur from January 1944 through May 1944, as the Allies repeatedly, but unsuccessfully, tried to conquer the slopes of the Cassino massif.  The eight scenarios include a January 1944 French attack, a February 1944 German counterattack against the Americans, a February 1944 German counterattack against the 4th Indian Division, a March 1944 German ambush of an American/New Zealander/Indian armored column, and 4 May 1944 Polish attacks.   The four Platoon Leader campaign games are equally varied.  CGI (American High Tide on the Cassino Massif) depicts an unsuccessful assault by the U.S. 36th Infantry Division in February 1944, CGII (The Tiger Attacks) represents an unsuccessful assault by the 4th Indian Division a week later, CGIII (Once More Into the Breech[sic]) depicts the initial Polish II Corps assault on Cassino in May 1944, and CGIV (Diadem) represents their final, successful attack a week later.

Particularly in terms of campaign games, this module offers much to ASLers.  Unfortunately, the module is nearly fatally flawed by one of the most unattractive maps published by Critical Hit in an ASL-compatible historical module.  Crudely hand-drawn, it is a monotonous series of different hues of brown-green-grays that are hard to understand and unpleasant to look at.  The map cries out, “Please don’t play me!”  This is unfortunate, as several of the scenarios in the module are interesting, particularly CAC2 (One Last Try).  If any older Critical Hit map ever deserved an updated, more attractive version, it would have to be this one.

It seems almost impossible to believe, but Gustav Graveyard is also an interesting ASL historical module fatally flawed by bad map artwork.  Yes, the artwork is entirely new, and in some respects it definitely represents an increase in quality over the CaC map graphics.  However,  large parts of the map–essentially almost every level 8 and 9 hill hex–are unreadable.  The colors used are so dark that most terrain that appears on top of the base level color is completely unintelligible.  This is crucial because so many of those hexes contain slopes, broken ground, or hillside scrub.  This author had to be about 8″ from the map before he could distinguish the terrain in many of these hexes–which makes it totally impractical for play.  It should be noted that the hex numbers are also printed in black and are equally indistinguishable.  In addition, the broken ground hexes and the hillside scrub hexes in general are hard to distinguish from each other at a distance.  The original Carnage at Cassino map was crudely-drawn and confusing-looking; the Gustav Graveyard map is in a way worse because, although the graphics are crisper, their intelligibility flaws will actually make playing the game difficult, which was not the case with CaC.  It should also be noted that the hexes in the GG map are smaller in size than those for most Critical Hit historical maps.

That a product with an infamously bad map could be replaced with a very different and yet essentially equally bad map is simply stunning.  It is really one of those “what were they thinking?” moments.  The rules state that “it is the publisher’s hope that the new edition will be viewed as an important upgrade to the earlier edition, art-wise.”  Sadly, that is not so.  This same text claims that the map is almost done for an adjoining “Cassino 2” module, which means that ASLers may be treated to even more of this artwork.

The scenarios of GG are the same as those in CaC, though they are all “ver. 2.0” and have been tweaked in various ways.  The campaign games are also the same as in the original.

The only addition is a countersheet, but virtually all of the counters on it are superfluous, being merely duplicates of existing official counters (primarily British MMC/SMC).  Three (x2) German emplaced tank turret counters are included; these represent the only new counters.

The GG situation is cruelly ironic, because in recent years, CH flooded the market with reprints of products no one had asked for, but a reprint of Carnage at Cassino–with fixed graphics–was something that some ASLers had for some years been calling for.  One can only imagine the crestfallen faces of such consumers when such a reprint finally occurred and they opened the package, only to find the dark murky maps of Gustav Graveyard.

2020 Update:  Do you want the good news first or the bad new first?  The good news is that in 2020 Critical Hit released, for separate purchase, a new version of the Cassino/Gustav Graveyard map, one that it not so hideously dark as its predecessor.  The bad new is that this map, dubbed “Cassino 1 Standard Size Upgrade Map,” is priced at $59.95 (Gustav Graveyard alone, at this time of writing, is priced $79.95). It is not clear if new copies of Gustav Graveyard come with the new map or if the new map must always be purchased separately.

To make things more confusing, Critical Hit also separately released this map in a “Monster Map” version with larger hexes.  The confusing thing is that this larger map is currently selling for only $39.95–a third less than the regular-sized version of the same map. 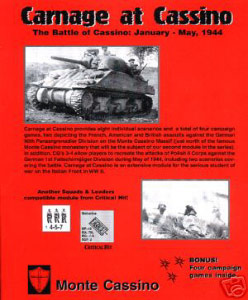