Udo Grebe Gamedesign (UGG), founded in 1997, is that rare beast, a German wargaming company (wargames have never been popular in Germany).  In 2005, UGG began publishing Command & Strategy, a house magazine (in English) with a game included in each issue.  Announced as a quarterly, it never even came close to such an ambitious publication schedule, and issues appeared about once a year.

In 2008, UGG announced that it would begin publishing a new magazine, Vae Victis International, the content of which would consist of translated articles and games from the long-running French wargaming magazine Vae Victis.  The magazine would come in a “magazine” edition, with no game, and a “deluxe” edition, which would come with the game, die-cut counters, and even a gamebox.  However, after lengthy delays with no magazine produced, UGG announced a change of plans in August 2009.  The concept of Vae Victis International was thrown out with the bathwater; instead, Vae Victis material would be incorporated into Command & Strategy, starting with issue #7, which would be called “Command & Strategy #7: A Vae Victis Compilation.”  It would be available in two versions, just as planned for Vae Victis International.  This issue of the magazine eventually reached American shores by the end of 2009.

The “magazine” version of this new iteration of C&S magazine (i.e., game rules but no game components) included articles translated from Vae Victis #80 and #81, plus new articles written for C&S.  These included game reviews, historical articles, and the occasional gameplay article.  As with some previous issues of C&S, such content occasionally touched on ASL.  In C&S #7, for example, there is a review of Valor of the Guards by Nicky Stevens and an analysis of AP32 (Second Crack at Caumont) by German ASLer Christian Koppmeyer.

The issue also included one translated Vae Victis ASL scenario, VVI-1 (The Achilles Heel), which originally appeared in VV#63 in 2005 as VV40 (Le Talon D’Achille).  Unfortunately, the scenario card has a layout which is both unattractive and not user friendly.  The original VV layout was far better than this new “international” version.

Many ASL players around the world have wished for English translations of the VV scenarios, but this is not exactly what they were hoping for:  a single scenario with a bad layout that appears in an expensive and irregularly produced magazine. 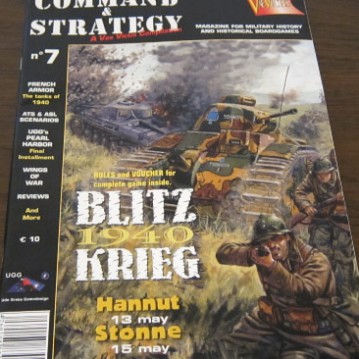