Contents:
2 pages rules, 8 scenarios, 336 die-cut counters. The rules claim that the game comes with "100 French infantry counters," but it does not.

Nothing having to do with Critical Hit is easy to figure out, but Counter Attacks I (also known as Counter Attacks and also apparently known as The SS Legions 1) appears to be the first in a new series of scenario packs by Critical Hit, although players should keep in mind that Critical Hit’s history is full of “series” that never advanced past the first item. The theme of the pack, as one of its myriad confusing titles suggests, has to do with the Waffen SS. Yes, yet another ASL product on the Waffen SS. The game system is about one umlaut short of becoming a shrine to the SS.

The pack comes with one full-size and one partial countersheet. The full-size countersheet consists mostly of black-colored 1/2″ SS counters, mostly 4-6-8 squads, 4-4-7 squads and another set of 4-6-8 squads that do not have their morale underlined. There are also a bunch of SS leader counters. The sheet includes 50 Croatian counters, which are two-toned Axis minors with a Croatian emblem. It also includes 20 Soviet counters consisting of non-Soviet support weapons in Soviet colors (presumably for use with scenario CA4; see below). There are also two non-SS German crews, simply because. The partial countersheet contains 56 5/8″ counters–a mix of black SS, German, Soviet and French AFVs, apparently all duplicates of already existing counters.

The two pages of rules explain some of these counters and provide “optional” rules for “Bayonet Charges” and “Marching Fire” seemingly cribbed from the pages of Kinetic Energy.

WARNING:  Some copies of Counter Attacks 1 purchased directly from Critical Hit came with copies of the W1-4 geoboards that appeared in Fire and Ice.  However, copies purchased retail do NOT have such boards included.  Thus prospective purchasers, whether on the secondary or retail markets, need to make sure they know exactly what they will be paying for.

Counter Attacks 1 (collectively) requires the following boards: 6, 9, 39, 40, 47, 58, CH1, CH2, W1, W2, W3, W4, and “Tobruk.”  W1-4 appeared in Fire and Ice.  CH1 appeared in Gembloux II: The Battle of France 1940, while CH2 appeared in A Few Rare Men. Players should be warned that there were printing problems with CH1 and CH2 and the boards may not line up correctly with other boards. The “Tobruk” map can be found in either Afrika Korps-El Alamein or Afrika Korps-Battle of Gazala. Only three of the scenarios in the pack use only standard “official” boards, so it may cost quite a bit extra to play the scenarios in this pack. On the other hand, for people who already own those other products, it gives them more of an opportunity to use those maps.

The scenarios are all designed by Brian Martuzas, who has a reputation for large and long scenarios of a somewhat antique 1980s-early 1990s style. The scenarios in Counter Attacks 1 will not really change this reputation. Every single scenario in the pack is large or huge in size. No scenario is shorter than 7 turns, either. These are “throwback” scenarios, resembling those appearing in early core modules more than they resemble the most typical scenarios today. Four of the scenarios use at least one module of OBA; two scenarios use Air Support. No scenarios use the Night rules.

CA4 (Saving the Devils) has one of the more interesting situations, as it features a large partisan attack on a Croatian position, with the Germans coming in as the “cavalry” to try and save their allies. The scenario is also noteworthy in that it is one of very few scenarios featuring Yugoslav partisans that attempts to arm them as they really were armed, i.e., primarily with British and Italian weapons. Also interesting is the other Yugoslavia scenario, CA5 (Shuttlecocks of Fate), primarily because of the SS vs. Italians match-up. The SS have 26 squads and 2 guns with which to attack a rather strongly fortified Italian hill position defended by 16 (1st line and conscript) Italian squads well armed with support weapons and assisted by 5 guns. Both sides get 70mm OBA.

The pack includes several huge scenarios, including the 10-turn CA7 (Vikings on the Steppe), which uses the “Tobruk” map and a number of overlays to depict a massive Waffen SS attack featuring 27 squads, 24 AFVs, and assorted goodies against a Soviet fortified position with 16 squads, 4 guns, and 10 reinforcing tanks. Also huge is CA8 (Taiga Tigers), which features a Soviet attack with 26 squads and 19 AFVs against a German fortified position defended by 20 squads, 3 guns, and 2 Tigers.

Counter Attacks 1 is a pack that will appeal to ASLers who like big, meaty scenarios; enjoy playing with or against the Waffen SS; and who already have the required Critical Hit maps.  It may also appeal to those people who own other Critical Hit products and want to get more use out of the CH maps. 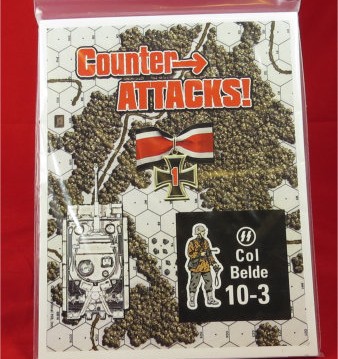