Contents:
32-page magazine that includes 10 scenarios as pages of the magazine.

In 1994, Avalon Hill announced that the ASL Annual would be discontinued (an announcement that turned out to be premature).  This announcement, coupled with a recent dearth of ASL products, seemed to leave the support of ASL in the hands of the ASL community itself.  Several groups of ASLers formed third party companies, such as Multi-Man Publishing and Heat of Battle, to ensure the continued survival of ASL.  One of the first such companies was Critical Hit! (sometimes spelled with the exclamation point and sometimes without), started by Ray Tapio with assistance from Rob Wolkey (who incorporated his Fire for Effect newsletter into the magazine, but was later to have a falling out with Tapio) and Steve Pleva (who would later drop out).  Its flagship publication was Critical Hit! Magazine, emulating the ASL Annual.  Originally intended to be published twice annually, it would turn out to have a very irregular publishing schedule.    In its collaborators, proofreaders (such as they were), designers, authors, and playtesters, it featured a wide array of support from all segments of the ASL community at that time (although many would later part ways with Critical Hit).

The first issue of Critical Hit Magazine appeared in late summer 1994, timed to coincide with the gaming convention Avaloncon (which at the time attracted many ASLers).  Its production values were originally fairly crude, although they would improve over time.  In the beginning, the magazine used scenario artwork which appeared similar to the “official” ASL artwork created by Avalon Hill, although it was stated that it was created from scratch.  Following legal battles between Critical Hit and Avalon Hill in the 1990s, the artwork changed in the magazine, as in other Critical Hit products.

As with virtually everything published by Critical Hit, consistency was not the strong suit of the magazine.  Everything about it changed, often from issue to issue, including the look of the magazine and even the paper on which it was printed (some issues might be printed on glossy paper, for example, while others on standard paper).  Even the numbering system changed, leading to subsequent confusion for new ASLers trying to complete their collections.  The first four issues of Critical Hit are numbered consecutively (#1, #2, #3, #4).  Following that, however, Critical Hit went to a “volume and number” system, so the issue that followed Critical Hit #4 was Critical Hit Volume 3 Number 1.  To make matters more confusing, not every “volume” has the same number of issues, nor does a “volume” include all issues printed in a single year (Volume 7, for example, has spanned multiple years).

In the 2000s, the tendency was for the magazine to come out much less often, at a rate of less than one per year, probably as a result of the shift of Critical Hit resources towards ATS and away from ASL.  However, later issues also tended to be “meatier,” with maps and countersheets frequently included.   The article content changed, too, becoming less “ambitious” and concentrating more on things like scenario analysis.  Given the relative paucity of ASLers with good writing skills, this shift to more modest article subjects was probably a good move.

Stewardship of the magazine went through several sets of hands.  Critical Hit founder Ray Tapio put together the early issues.  With Volume 5 Issue 2, Trevor Holman became “Managing Editor.”  However, after just two issues, Ray Tapio once more assumed that role.  After one issue, Bob Gray became the new managing editor.  Several issues later, Dave Lamb was appointed “Executive Editor” and helmed it until the magazine went into hiatus in the mid-2000s.

As with everything else involving Critical Hit, some controversy surrounds Critical Hit magazine.  Some people have contended that “early issues” of the magazine have better scenarios, while later issues (now mid-range issues) have very poorly playtested scenarios.  One person even asserted having submitted a deliberately unbalanced scenario to Critical Hit, just to see if it would appear unchanged (it allegedly was).  Other people, including this author, believe that the overall scenario quality was best under the “Dave Lamb era.” It is probably true that, quality-wise, the mid-range issues had the most problems.  But with over 160 scenarios published in the magazine over the years, ASLers have seen plenty of dogs and classics alike in Critical Hit Magazine.

Critical Hit Magazine Issue #1.  32 pages (which includes 10 scenarios).  With only 22 pages of text, the article content of the inaugural issue of Critical Hit Magazine is necessarily slim, and some of the articles are weak (or charmingly obsolete, as in the case of an article on how to play ASL by telephone).  However, it does include a worthy “Beginner’s Guide” article by Russ Bunten, as well as a Scenario Replay by Chicago ASLers Rob Banozic and Scott Drane and an interesting scenario design article by Ray Tapio and Steve Pleva.  One article featured the Komsomolets, a Soviet gun tractor, along with an offer:  for $2.25, plus $.75 shipping and handling, readers could receive a set of 6 unmounted color counters, blank counters on which to mount them, and 2 scenarios featuring Komsomolets.

The scenarios in Issue #1 are a mixed bunch; the first Critical Hit scenario, CH1 (Authie: The Death of Company C) was also its first dog, with a current ROAR record of 17-1.  However, the issue also produced a genuine classic scenario, CH6 (Armored Probe, later reissued with slight changes as CH157), designed by Mark Porterfield (who 20 years later continues to produce designs for Critical Hit).  It also reprinted (slightly modified) one of the all-time classic ASL scenarios CH5 (Acts of Defiance), designed by Pete Mudge, originally published in the Rout Report newsletter.  Acts of Defiance would later be reprinted in an ASL Annual (as A68 in ASL Annual 95).  CH4 (Steutzpunkt Vierville) may be of interest to some, as it is an amphibious landing. 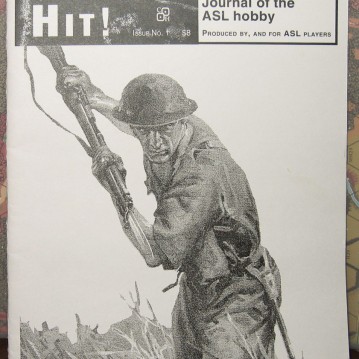