Ray Tapio is the ASL master of recycling, repackaging and reselling his own products to the ASL world.  It thus came as no surprise in 2008 when Critical Hit began to debut new versions of the early issues of Critical Hit Magazine.  Straight reprints were not possible because early issues of the magazine ran afoul of copyright issues with Avalon Hill in 1997 because of some of the artwork used (particularly counter artwork).

Retro Issue #1 (2008).  The first Retro issue is largely a reprint of Critical Hit Magazine #1.  However, it is 36 pages to the original’s 32 pages.   This is due to the inclusion of two minor articles, “A Novice Gets What?”, by Philippe Leonard, and “Squeeze 9 into 3,” by F. Boudrenghien and J. Devaux, both of which originally appeared in the European newsletter ASL News (to which Critical Hit later acquired the rights).   The Retro issue contains 10 scenarios, which appear both within the magazine’s pages and as separate cardstock inserts.  They are the same 10 scenarios that appear in Critical Hit Magazine #1.  Errata or other changes seem to have been included for 4 of them; otherwise, they are exactly the same (possibly scanned), with the exception of counter artwork and the positioning of the historical background (for copyright purposes).  This fact means that players still need the magazine, despite the cardstock, as two of the scenarios have SSRs that continue on other pages of the magazine (CH couldn’t be bothered to include an additional piece of cardstock with the SSRs).

Retro Issue #2 (2008).  The second Retro is a reprint of Critical Hit Magazine #2.  It is 52 pages to the original’s 48 pages because of the inclusion of an ASL News article, “The Trick of the Tail (2),” by Philippe Leonard.  It contains the same scenarios as Critical Hit Magazine #2, with changes similar to those described above for Retro Issue #1.  They are also included as cardstock inserts.

Retro Issue #3 (2009).  The third Retro issue is, confusingly, a reprint of of the article content of Critical Hit Magazine #4 but a reprint of selected scenarios from CH Mag #3 and #4 (and one not from Critical Hit Magazine at all).   As such, unlike Retro #1 or #2, Retro #3 cannot be considered a suitable substitute for a copy of the original magazines.  An interview with Brian Martuzas was, for some reason, removed and replaced with an article on the French in ASL by Philippe Leonard that was presumably taken from ASL News.  Otherwise, the article content is mostly the same, though laid out slightly differently.  Unlike the previous two issues, scenarios in Retro #3 appear only as cardstock inserts, not as pages in the magazine.  The scenarios also have a very different layout from the originals.  Two of them, Test of Nerves and Operation Nordwind, contain the odd statement “provided FREE as a courtesy to readers of CH Retro #3 magazine.”

Retro Issue #4 (2009).  The fourth Retro issue has a confusing and rather unforgivable misprint right on the cover:  it is labeled as Issue #1.   However, the actual Issue #1 has a grizzled Soviet veteran on the cover; Issue #4 has a German tank commander on the cover.  The issue is a real mishmash of stuff and can’t really be seen as a substitute for any original issue of Critical Hit Magazine.  It contains the articles “Toasting Marshmallows” and “Yad Mordechai” from Critical Hit Magazine Volume 3, No. 1, the article “Some Foggy Notions” by Pedro Ramis and published originally in ASL News, and “At The Point & The Kibbutz” by David Longworth, which was originally printed in the Australian newsletter Rate of Fire and may or may not have been printed somewhere previously by Critical Hit.  Note that three of the scenarios are included elsewhere in other products printed at roughly the same time as this one. 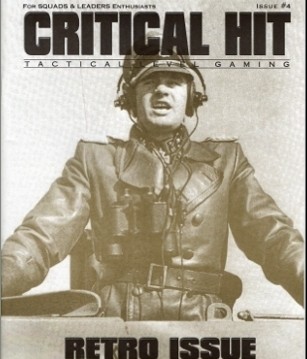