2nd (2014 reprint) Edition: 40-page magazine, plus 12 scenarios on cardstock inserts.  NO Busting the Bocage or overlays.

This issue of the magazine appeared almost two years after its predecessor, causing many to wonder if perhaps Critical Hit Magazine had breathed its last breath, which was apparently true, because as of 2014 there has not been another issue.

The article content of this issue is primarily written by Brit Ian Daglish and recycled from a publication for Critical Hit’s ATS series of games, with minor content by Steve Swann, Scott Holst, and Jim Thompson.  The article content is largely forgettable.

The issue also includes play aids, homemade versions of which had been designed and used by ASL player Steve Pleva for some years.  The aids are basically “offboard overlays” used for setting up reinforcements.  They are actually quite useful.  It also includes a small countersheet consisting of named leader counters.  These were the leftovers from an offer by Critical Hit to create personalized leader counters for a hefty fee.  They will be of virtually no use to people who buy the magazine.

Of the 12 scenarios, 2 are designed to be used with Critical Hit’s Spanish Civil War module, Guerra Civil, and use maps or overlays from it.  Another scenario (a very large one) uses the Sujewo Heights map from the Tigers to the Front module to represent the Seelow Heights east of Berlin in 1945.  The other scenarios feature a fairly wide range of actions, including the East Front, Japanese vs. Soviet actions on Sakhalin Island in 1945 (one of them featuring a Soviet seaborne assault!), France 1940, Crete, and France 1944.  Most of the scenarios are tournament sized.  Overall, they seem a decent selection.

The magazine also includes the “Third Edition” of Busting the Bocage (which itself was essentially another version of Pointe du Hoc).  It was actually advertised considerably earlier as a standalone product, but instead was released as an “extra” for the magazine.  It features a slightly reworked version of the Busting the Bocage map and slightly reworked versions of its scenarios (although, irritatingly, they were given new scenario names).   There really doesn’t seem to have been a need for another version of this module.

In 2014, Critical Hit released reprint editions of a number of issues of its magazine, including this issue.  The magazine content of this issue appears to be a simple facsimile of all the original content.  The scenarios also appear to be pure copies of the originals, without even any errata added.  The overlay sheet is gone, as is all of the Busting the Bocage content.  The facsimile reprint is priced at $19.95. 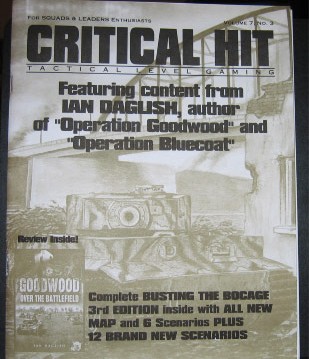