The Crown Jewels Pack is a 2014 offering in Battleschool’s long line of 1/2″ (12.5mm) custom precision “nationality” dice, a series of white dice, each of which is customized towards a particular country, nationality, or other military force.

In the case of the Crown Jewels” pack, there are two dice, one for the Union of South Africa and the other for the then-British colony of India.  South Africa declared war on Germany in 1939 and subsequently fought in North Africa, East Africa, Madagascar and Italy.  India, though not an independent country, played a much larger role in World War II, fielding the largest all-volunteer force in the war.  Indian units fought in substantial numbers in North Africa, East Africa, the Middle East, Italy, Malaya, Burma, India, and elsewhere.

The South Africa die features, as a symbol of South Africa, an amber-foil springbok in lieu of the “1” face.  The India die features a blue-foil “Star of India” symbol (this star symbol was used on various British flags during the colonial period).

The dice are attractive. 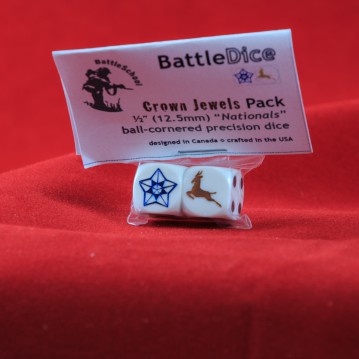