Debuting at ASLOK 2005 was Dezign Pak 1, the orthographically challenged title of the first scenario pack released by the EastSide Gamers.  It features 10 scenarios on light cardstock that depict a lot of East Front action and a scattering of actions from other fronts.

With titles such as “The Fast, the Slow & the Doomed” and “Soumassalmi Sandwich,” the ESG sense of humor shines through, but the scenarios themselves are quite serious.    Overall, the scenarios tend towards the large; the pack features 6 large scenarios, 2 medium-sized scenarios and 2 small scenarios.  One of the scenarios, ESG10 (Gut Check), may feature the smallest map area ever in an ASL scenario, as it uses only a portion of a single DASL board.  One other scenario, ESG7 (Backstab), is also a DASL scenario.  Both feature Italian troops.  Two scenarios have OBA; one scenario has Air Support.

The varied scenario actions include:

ESG scenarios tend to have, at absolute best, an indifference to historical accuracy.

The scenario pack has had limited distribution, and thus limited play, so far, but it has several good scenarios.  One of them, ESG6 (Clean Up Crew), is a scenario particularly well suited for tournament play.  ESG2 (Swallowed Whole) is also pretty balanced.  The pack is a good first effort and hopefully there will be more ESG products in the future. 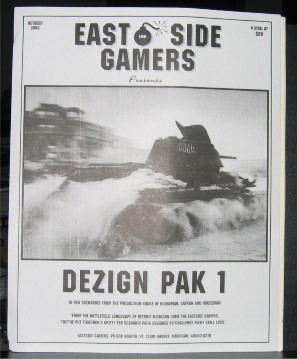