Dezign Pak 10 (DP10), somewhat redundantly announced as a “10th Anniversary Edition,” is the latest–and what is said by the EastSide Gamers to be the last–ESG scenario pack.  If so, the Dezign Paks will have contributed 127 different scenarios to the ASL corpus.

Assuming that this is true and that ESG does not rise, phoenix-like, from the ashes, it may be worth taking a moment to examine the Dezign Paks in toto.  The Dezign Pak scenarios have a lot of continuity throughout their 10-year run.  The production values remained pretty much the same (adequate visual representation, awful proofreading and editing), as did the style of the scenarios themselves.  Historical accuracy was often bad (some scenarios even having the nationality of the combatants wrong), with lead designer Glenn Houseman often even boasting about the lack of research (Houseman has admitted to sometimes designing scenarios “backwards,” i.e., creating a generic scenario, then looking for some historical action to tie it to).

As far as scenario play goes, early Paks tended to have somewhat scripted scenarios, though ESG later backed away from this.  The ideal audience for the Dezign Pak scenarios probably would consist of novice to journeyman level players who are looking for a “fun” scenario without necessarily caring too much about who wins.  Not all Dezign Pak scenarios received a lot of playtesting–indeed, Glenn Houseman often made much about this fact in posts on on-line forums, in essence arguing that lots of playtesting simply wasn’t needed if one was an experienced designer.  This is a line of argument with which many other scenario designers or publishers might disagree.  Moreover, ESG was not helped by the fact that none of its principals are expert-level players, something that can definitely affect playtesting.  Over the years, some tournament directors and experienced players began to edge away from using or choosing ESG scenarios in ASL tournaments, unless those scenarios already had proven track records.

That probably describes things in a nutshell:  Historicist ASL players and expert-level or competition-oriented ASL players are typically not big ESG fans, while novice-to-journeyman level ASLers with a “just for fun” emphasis tend to be more vocal fans.  As long as one was not a stickler for historical accuracy, each Dezign Pak certainly contained some very playable scenarios.  One cannot help but wonder if more attention to detail and more playtesting might have made the Dezign Pak scenarios a little less unpredictable in their quality levels and balance.

Two other classes of ASL players might also be fond of ESG:  DASL fans might appreciate the fact that ESG always included at least one DASL scenario in each Pak, while “monster” gamers definitely have appreciated the super-large scenarios that ESG included in a number of its Paks.

Here is the historical text (intro and aftermath combined) for ESG117 (Devils on our Flank), a Harms scenario:

Northwest of Kvan, Norway, April 26, 1940:  German forces advancing northwest from Oslo were trying to link up with their counterparts at Trondheim and complete the conquest of most of Norway when, upon reaching the village of Kvan, they found the British blocking their way.  The Germans tried to overwhelm them quickly with heavy armor, aircraft and artillery but failed initially.  The next day General Pellengahr ordered a battalion of infantry to get around the defenders while the rest of the battle group again attacked the village.  The York and Lancasters had countered the immediate threat but were still under tremendous pressure when a small detachment of volunteer ski troops, sent from the Norwegian 2nd division and well-armed with machineguns, arrived to attack the German flank.  Caught off guard by the unexpected fire, the German Infantry pulled back to regroup.  Despite gaining a momentary respite, 15th Brigade faced the prospect of encirclement and had no choice but to pull out of Kvan that night.  The relentless German advanced continued.

In contrast, here is the historical text for ESG120 (Doom Platoons):

Polotsk, Russia, July 1, 1944:  The Bagration behemoth swallowed whole towns and the German units were being worn down to stubs.  Panic was becoming more common as the battle took on all the appearance of a race, with the Soviets doing the chasing.  Rear area troops were thrown in front of the Soviet avalanche piecemeal, anything to slow down the attack so that others could escape westwards.  Now it was time for every soldier to fight for his life.  Germans tried to hold at Polotsk, and for a while the security forces, unused to hard combat, felt a thrill as the tactically moronic Russian bodies were chopped at and crumbled by well-placed rifle rounds.  The first Russian charge faltered, but then they came back strong.  Now the Security forces were coping with ugly wounds, diminishing ammunition, and an increasingly hopeless position as their numbers waned.  The last of them died in the interior rooms of houses as the unending Russian infantry flowed past them.

Note that the first text actually contains details about actual units doing actual military things.  The second text substitutes grisly depictions of imagined carnage for actual historical information or detail.   The 201st Security Division did fight in the Polotsk operation but that’s the only fact that this scenario conveys.  Everything else seems made up.

The scenarios are straight-forward, typically with little or no chrome or flavor SSRs.

Several of the scenarios are interesting or noteworthy.  Perhaps the most noteworthy is the “monster” scenario in the pack, ESG126 (War of the Gargantuans), which is not merely a super-large scenario but is moreover 1) a three-player scenario and a 2) fictional scenario.  That ought to make it controversial.  The scenario takes place in a very alternate August 1945 in which a military coup takes over the U.S. government, assassinates Churchill and precipitates an opportunistic intervention in Germany by Stalin.  It’s simply a pretext for unloading a whole bunch of armaments onto the playing area and getting the carnage going.  Sides and turn order are randomly determined before scenario start. 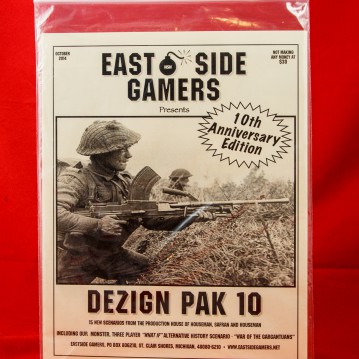