The irrepressible EastSide Gamers team of Houseman, Houseman, and Safran debuted their sequel to Dezign Pak 1 at ASLOK 2006.  Dezign Pak 2 featured a dozen scenarios, most of them tournament-sized, printed on light cardstock.

The un-themed pack features actions from a variety of different theaters, including:

That last scenario, ESG22 (Ears for Souvenirs), may have the smallest playing area of any ASL scenario, as it consists of just nine hexrows on a single DASL map.

One of the scenarios, ESG11 (Symphony of Violence), is a massive 6-board, 11-turn British vs. German river crossing scenario, featuring tons of AFVs, OBA, air support and more.  It began a tradition of monster scenarios on the part of ESG.

Another scenario, ESG14 (Tracks Back to Cambrai), is a large shooting gallery scenario featuring 33 mostly thin-skinned American AFVs trying to survive the fire from 4 88mm AT guns, as well as 150mm OBA and a liberal dosage of Panzerschrecks. A third scenario, ESG20 (Feast of Horror) is a large all-armor action.

The other scenarios are much smaller, most of them suitable for tournament play.

The most popular scenario in the pack has been the fun and balanced ESG12 (Road Kill).  The other more-played scenarios in the pack are not very balanced, but there are a number of scenarios that just haven’t received much play.

The EastSide Gamers do deserve style points of some kind for the titles of ESG13 (Hands across the Slaughter) and ESG17 (Money’s on the Dresser). 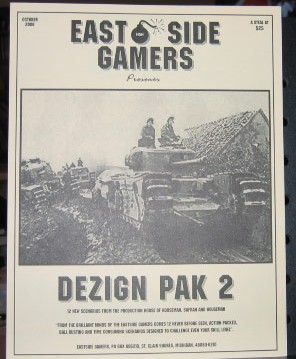