The Eastside Gamers trio of Glenn and Scott Houseman and Eric Safran expand their designer repertoire to also include fellow Detroit ASLers David Lamb and PJ Norton in this, their third scenario pack (all of which have been released annually at ASLOK).  The result is a collection of 15 varied scenarios that include a genuine monster scenario–it says so in the title!

Over the past several years, ESG has exhibited various quirks or tendencies, all of which are exhibited here.  For example, the ESG are firmly committed to supporting DASL; as a result ESG23 (Gak Gak the Ack Ack) uses DASL boards.  No ASL Starter Kit boards appear in any of the scenarios, but the old Heat of Battle High Ground! maps (HOB-I and HOB-II) make their appearance in ESG32 (Steel, Steel, Steel!).  Overlays are pretty scarce, but terrain substitutions are liberal (examples in the pack include “treat all marshes as woods,” “treat all grain as Mud,” “treat swamp as open ground,” “treat Orchard hexes as shellholes,” “treat Grain as Marsh,” “all woods are brush,” “treat all grain and woods as brush,” and “all grain hexes are treated as Deep Snow.”  This sort of substitution is a pet peeve with a number of ASLers, who may not like the frequency with which they appear in this pack.

Dedication to historical accuracy is also typically an absence.

Two Chinese-Japanese scenarios, ESG36 (Havoc in Shanghai) and ESG37 (Tsunami of Maniacs), compose two halves of one larger action and can actually be combined into one scenario.  The scenarios are fun, but the Chinese probably need the balance.

One interesting scenario is ESG26 (Diabolical Shrapnel), which features an Italian attack against American positions on Sicily.  The Italians have 22 squads of varying quality, plus a hero, to take on 8 1/2 airborne squads.  If the 22 squads weren’t enough for the Americans to have to worry about, they must deal with an Italian 150mm artillery piece, led by a 10-2 “Ordnance Leader.”  And both sides must worry about random naval artillery (as an SAN option instead of activating a sniper).

However, the centerpiece of the pack is the aptly named ESG35 (Destroy All Monsters), a huge German vs. American scenario set during Operation Nordwind that includes everything but the kitchen sink in it spread out over six full geomorphic mapboards.  The defending Americans have 57 squads, 20 leaders, 2 heroes, 6 armor leaders, 3 .50 cal HMGs, 3 FTs, 3 DCs, 7 guns, and 46 AFVs.  The attacking Germans have 48 squads, 17 leaders, 7 armor leaders, 8 MMGs and HMGs, 2 FTs, 3 DCs, 2 guns, and 44 AFVs, including some very nasty ones (seemingly every German assault gun or tank destroyer available).  Unfortunately, many of the AFVs are identified on the scenario cards by their nicknames (Jumbo, Easy 8, Hellcat, etc.) rather than by their real names.  The AFV mix may be a bit dubious historically, but that will hardly matter to the people to whom this type of scenario appeals.  Its size practically screams out for team play.

Overall, about 8 of the scenarios can be considered small, with the remaining 7 about equally divided between small and medium.

The scenarios have not been played much, overall, and the most popular scenario according to ROAR, ESG25 (Road out of Rangoon), is also one of the most unbalanced. However, there are some decent actions here. 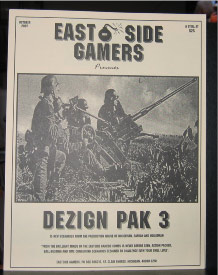