In 2008, the EastSide Gamers (Glenn Houseman, Scott Houseman, and Eric Safran) released their fourth annual scenario pack a ASLOK.  Dezign Pak 4 (DP4) contains 15 scenarios, the majority of which were designed by Glenn Houseman.

Situations are quite varied chronologically and geographically and include:

The scenarios tend towards the large; there are 3 small and 3 medium-sized scenarios, and 9 large scenarios.   Five of the scenario require OBA rules (much of the artillery is heavy-grade), while 3 employ Air Support (some have both).  With these exceptions, most of the scenarios are SSR light.  None use overlays (Glenn Houseman disliking them), although many of the scenarios use shellhole counters to cover unwanted buildings.  All of the scenarios use geomorphic mapboards from #s 1-52, with the exception of ESG44 (Testis Megalos), which is the one DASL scenario they usually put in each pack.

Fidelity to historical accuracy is rarely a major concern.

Some of the scenarios are interesting.  ESG38 (Choke Point) is a small fast-playing all-infantry scenario using Norwegians, British and Germans, which might also be a good entry level scenario.

Another, similar scenario is ESG41 (Commence Hostilities), which is a tight little forest-y action that is fairly replayable but which favors the Poles.

ESG46 (“Mad Mike’s” Finest Hour) is a meaty PTO scenario that uses 4 full geomorphic mapboards.  It pits Chindits and elite Chinese (a total of 33 squads) against 16 Japanese squads (plus assorted crews, Guns, etc.); prior to play, the British/Chinese player must choose one of two different sets of victory conditions.  ESG48 (PaK Nest) is interesting in that it features a large French attack in May 1940 against a surrounded German force.

The big scenario in the pack is ESG49 (Atrocity is Mandatory), a 14-turn monster set in the mop-up phases on Saipan.  In this scenario, the Americans have 80 squads, plus assorted AFVs and Guns, not to mention 150mm OBA.  The Japanese defenders have 33 squads and a number of crews, plus assorted light Guns and a whole host of mines and fortifications.  Unfortunately, the entire Japanese OB begins the game HIP, which can possibly make for a slow and frustrating playing, given the scale of the scenario.

Coming in second, size-wize, is an East Front monster, ESG52 (Engulfed), that might prove popular among aficionados of massive East Front actions.  It uses 6 half-boards to represent a Soviet attack (with 30 squads and 18 AFVs, plus OBA and Air Support) against German defenders with 31 squads, 5 guns, and 7 AFVs. 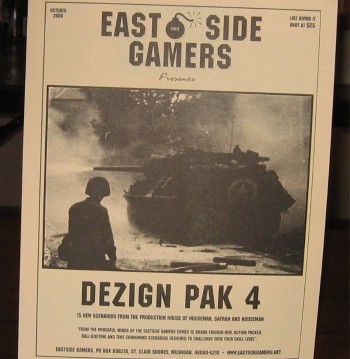