With Dezign Pak 5, the Detroit, Michigan-based EastSide Gamers (Glenn Houseman, Scott Houseman, and Eric Safran) make it 5 years in a row that they have released an ASL scenario pack at the ASLOK convention.

ASL scenario packs tend to fall into one of two very different categories:  either they focus on a very narrow theme (following a particular unit or covering a particular battle, for example) or they present a broad panoply of actions from across World War II.  The Dezign Paks have always chosen the latter route.  Actions featured in the pack include combatants such as Poles vs. Germans (Poland 1939), French vs. Germans (France 1940), New Zealanders vs. Germans (Greece, 1941), Yugoslavs vs. Italians (Albania 1941), Americans vs. Japanese (Philippines 1941),  Soviets vs. Germans (Lithuania 1941, Soviet Union 1941, Soviet Union 1942, Poland 1944), Soviets vs. Hungarians/Germans (Soviet Union 1942), Rhodesians/South Africans vs. Vichy French (Madagascar 1942), British vs. Italian (Sicily 1943), British/Chinese vs. Japanese (Burma 1944), Americans vs. Germans (Italy 1944, Germany 1944),  and Soviets/Romanians vs. Hungarians/Germans (Austria 1945).

The pack also includes two “bonus” scenarios, two 1940 Norwegian vs. Germans actions (more or less, both are different attempts to depict the same action).  These scenarios come from a somewhat controversial on-line “contest” organized by a few members of an on-line forum.  The premise for the contest was that participants would all design a scenario based on the same historical material, then judges would vote on which scenarios they liked the best.  The participants later released the entries in downloadable form, though many of the scenarios were never fully playtested or developed.  As there is no explanation accompanying these “bonus” scenarios, which were contest entries by two of the ESG members, it is not clear if these scenarios were fully playtested and developed.   One hopes they were.

The scenarios are printed, as before, in black and white on heavy paper/light cardstock.  Proofreading is sometimes haphazard (as in “11th Philippino Div.”).

Leaving aside the “bonus” scenarios, the other 16 scenarios are overwhelmingly large to very large in size.  The pack only has 4 small or medium-sized scenarios; the rest range from large to huge in size.  Only a few of the scenarios in the pack are playable in a tournament setting, or on a weekday evening.  One of the largest scenarios, ESG67 (Keep ‘Em Separated) uses 4 full maps and 4 half maps.  One scenario, ESG56 (Cost of Allegiance), uses DASL maps.

Overall, SSRs are few in number.  One scenario has Air Support (another provides it as a balance); one scenario has OBA (so does one of the “bonus” scenarios).   Many of the scenarios are vehicle heavy; here are the total vehicle counts for each scenario:  6, 16, 1, 21, 11, 0, 20, 14, 11, 20, 14, 0, 26, 22, 0, 23 (as is not uncommon with ESG scenarios, many of the vehicular OBs are of the “everything but the kitchen sink” variety, with a wide array of different AFVs thrown into a side’s OB).  Along with the kitchen sink OBs, sometimes other historical details are lacking in accuracy in some of the scenarios.  For example, in ESG55 (Philippine Firemen), the Americans are given 2 60mm mortars in their OB.  Well, the Americans technically did have 60mm mortars in the Philippines, but no ammo for them, so they were not used.

One interesting tournament-sized scenario is ESG58 (The Vindicators), which features two groups of British attackers trying to clear some average Italians with above average leaders and machineguns from some buildings and hills.    An interesting larger scenario is ESG60 (Groupement Molinié’s Honor), which is a relatively rare meaty France 1940 scenario, featuring a large German combined arms attack against a group of resolute French defenders, well armed with support weapons, guns, and vehicles.

The mix of situations in the pack is nice, but a better mix of scenario sizes would probably allow more of the scenarios to be played more often.  The scenarios have not received much play on ROAR and none particularly stand out. 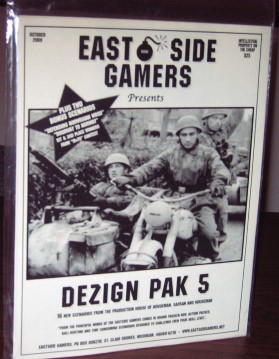