Dezign Pak 6 (DP6) is the latest scenario pack from the Detroit, Michigan-based EastSide Gamers (Glenn Houseman, Scott Houseman, and Eric Safran).  As with every other pack in the series, it is a set of mixed scenarios featuring different theaters and nationalities.   It is printed on yellowish white light cardstock with, it must be admitted, indifferent proofreading.

Unfortunately, a few of the scenarios seem to have gaps in their research.  Most notably, ESG71 (Obliteration) depicts an action from the Battle of Bessang Pass in northern Luzon in 1945.  This is a famous battle for Filipinos, as it was a hard fought victory in conventional warfare by the Filipino guerrillas of USAFIP (NL) , a major guerrilla group, over the Japanese.  Even the most cursory Google search would reveal that this was a battle fought by Filipino guerrillas led by Col. Russell Volckmann.  However, in the scenario, the Filipinos are referred to as “Americans” and their forces are represented purely by U.S. units; it seems the designer confused the name of the guerrilla unit (121st Infantry Regiment) with an actual U.S. Army regiment.  In another scenario, ESG77 (The Trouble with Tito), Tito’s partisan forces are armed completely with Soviet weaponry, even including a Soviet 82mm mortar.  In reality, though, the Soviet Union had only relatively begun recently providing any equipment at all to Tito’s partisans, and then only to the units reachable by the Soviet supply chain (which did NOT include Slovenia, where this scenario takes place, still behind German lines).  The Slovenian 9th corps was armed with British, American, Italian, and some Axis captured weapons.

A number of the scenarios of Dezign Pak 6 are interesting.  ESG69 (Brushwood Buzzsaw), though with six half maps something of a pain to set up, depicts a pretty interesting tactical situation in this Franco-American clash.  So too is the other such scenario, this one with the French on the attack, ESG75 (Chopped off at the Knees).

Of the larger scenarios, one of the more interesting is ESG70 (Opening the Burma Road), a Sino-Japanese action depicting the little known see-saw late war fighting between the Chinese and Japanese in the part of Yunnan Province northeast of Burma.   Few scenarios exist depicting this fighting.  In this 6-board action, the Chinese are on the attack, with 44 squads of varying types, accompanied (possibly a bit inaccurately) by a few light AFVs, as well as (more probably) some air support with bombs or napalm.  The defending Japanese have 24 squads (of varying types), 7 guns, and 3 light tanks.  The Japanese are also given 3 DCs, with the instructions that even HIP tank hunter heroes (normally prohibited from possessing DCs) may be given them.

The biggest scenario, though, is the 10-board, 16-turn ESG73 (Orgy of Gore), depicting a major Soviet attack on German positions in Latvia in the summer of 1944.  This scenario gives the Soviets 74 squads (almost the whole Soviet infantry OB aside from conscripts), with every type of support weapon, aided by 4 guns and 53 AFVs (of 11 different types, in the typical and ahistorical ESG “throw in everything but the kitchen sink” style).  The Germans have about 70 squads (of many different types), 8 guns, and 61 AFVs (of an amazing 21 different types).  The Germans also have 9 armor leaders.   This scenario probably resembles the actual battle little more than an episode of “Designing Women” would, but for the sort of ASLer who loves playing with massive numbers of men and AFVs, that’s almost beside the point.  In this case, the play’s the thing, regardless of how unlikely.

The scenarios have not been often reported to ROAR.

All in all, Dezign Pak 6 is a typical ESG offering.  The production values are not high, and the scenarios are not always exactly full of fidelity to history, but they typically portray interesting tactical situations and are often fun for gamers. 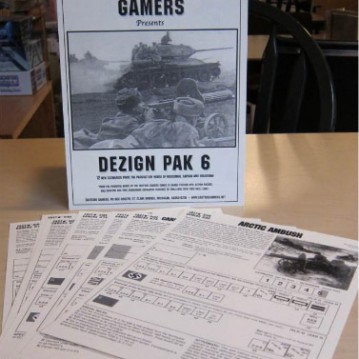