In appearance, it is the same as any of the other packs, and also as indifferently proofread.  The U.S. 115th Infantry Regiment, for example, is described as the “115th Infantry Battalion” (an easy mistake to spot, as U.S. infantry battalions did not have numbers higher than 3).   Elsewhere, a mystery French unit appears, dubbed “Battalion 109 RI.”  Since “RI” is actually the French abbreviation for infantry regiment, one assumes that this in reality is an unspecified battalion from the 109th Infantry Regiment, which did fight at Jargeau (not “Jargeaud,” as the scenario card suggests).  In one scenario, ESG88 (Death Machines), a tank battle, the Soviet units are indicated only as being from the “6th Guards Army” and the German units only as being from the “4th Panzer Corps); the generic-seeming scenario appears to have been derived solely from some passing mention.

A couple of the scenarios in the pack look interesting.  ESG90 (Sadistic Frenzy) depicts an “escape attack” by 15 second line Japanese squads (and some conscript reinforcements on wagons) against a poorly armed Chinese force.  The Japanese may win either by clearing a road across the board by game end, or immediately if they exit 20 EVP.  ESG84 (Bitter Brittany) is a fairly meaty scenario depicting an American combined arms attack on a German defensive position.  The Americans have a couple of different ways to win.  ESG81 (A Healthy Respect), one of the Pete Mudge scenarios, is also an interesting combined arms American-German clash, but players must keep a great many SSRs in mind, including a number of terrain changes.

The most-played scenario so far has been ESG91 (It’s Not Over), a French-German 1940 action that has been used in tournaments; the French seem to have a major advantage. 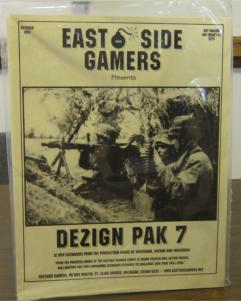